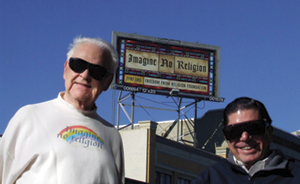 The Freedom From Religion Foundation and 21 of its California members filed a federal lawsuit in Sacramento in October 2009 challenging tax benefits for clergy commonly known as “the parsonage exemption.” Dick Hewetson, a Foundation Lifetime Member, Board Member and former Episcopal priest, talks below about the tax break he still gets despite being long gone from the parsonage.

I have an income tax break that most members of FFRF do not share. Because I receive a pension from the 11 years that I served as a clergyman, a portion of that income is not taxed. It is called my “housing and utility allowance.”

It goes back to a tax law that allows clergy pay to be divided into two separate categories: salary plus housing and utility allowance. The latter amount is excluded from federal tax. It is not included on Form W-2 as taxable income (although it can show up, with an explanation, in Box 14 of the W-2). Wouldn’t you like it if your employer could divide your pay like this? Well, god is not on your side.

The tax code has been amended at least twice. In 1971, the Internal Revenue Service limited it to the “fair market rental value” of the furnished home, utilities included. Evidently, some god-fearing clergy were accepting housing and utility allowances above the amount they actually paid!

In 2002, Congress more carefully defined the market rental value because of a case in the U.S. Court of Appeals for the Ninth Circuit on the amount that Rev. Rick Warren of Saddleback Church was claiming. Rather than let this go through the courts, Congress quickly amended the law to save the clergy from having to report this as taxable income. It is really amazing to me that Congress is so intent on maintaining this obviously unfair tax law.

To add insult to injury, if clergy own homes, they can still deduct their real estate taxes and interest on their mortgage payments from their taxable income. Remember that the money they are paid for their home expenses is not part of this taxable income.

“The tax break is not available to the staff at secular nonprofit organizations whose scale and charitable aims compare to those of religious ministries like Pastor Warren’s church, or to poorly paid inner-city teachers and day care workers who also serve their communities.

“The housing deduction is one of several tax breaks that leave extra money in the pockets of clergy members and their religious employers. Ministers of every faith are also exempt from income tax withholding and can opt out of Social Security. And every state but one exempts religious employers from paying state unemployment taxes —  reducing the employers’ payroll expenses but also leaving their workers without unemployment benefits if they are laid off.”

A Vermont clergyman, Jay Sprout, wrote in the May 8, 2002, Christian Century:

“The question this issue always raises for me is, what principle? The principle that ministers are entitled to a tax break available to no other taxpayers except, I believe, certain military personnel? I am not eager to pay more tax than the law requires and have received thousands of dollars of benefits, thanks to the housing tax break for clergy.

“But I have never understood why I should enjoy such a privilege or why church institutions should be so vigilant in their efforts to protect this tax advantage. Jesus was particularly critical of religious authorities and others who claimed special status in society. Can you imagine ‘the Son of Man [who had] nowhere to lay his head’ living in a house worth $80,000 a year?”

Now, getting back to the fact that I still get the break. Because I receive a pension from the church, any amount up to what I pay for rent and utilities is not considered taxable income. Don’t you wish you were in my shoes? Hey, it’s legal.

Dick Hewetson served as an Episcopal priest in Minnesota and Wisconsin before leaving the church and coming out as an atheist in 1972. In 1983, he and his former partner founded the Quatrefoil Library in St. Paul, Minn. He moved to San Francisco after retirement in 1992 and since then has coordinated and facilitated programs for Elderhostels, the Freedom From Religion Foundation, New Leaf Outreach to Elders and the Center for Learning in Retirement. He turned 80 in March.