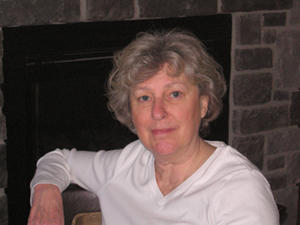 Why I volunteer for FFRF: I greatly admire and appreciate the Foundation’s dedication and commitment to uphold the Establishment Clause and keep religion out of government and in churches and private homes where it belongs (if it has to be anywhere at all).

I am appalled by the pervasiveness of religious belief, not only in our society at large, but in courtrooms, seats of government and public schools where not a second’s thought is given to whether it’s proper or necessary to say prayers and invoke the blessings of God and/or Jesus Christ. The Foundation, with its lawsuits and billboards and letters of complaint to public agencies about Establishment Clause violations, gets in people’s faces and gives its members a voice in the fight for change.

What I do as a volunteer: Whatever needs to be done on the days I come in, but my main project right now is organizing and indexing the Foundation’s litigation files, which date back to the 1980s and are a remarkable tribute to the courageous battles the Foundation has taken on. I also help with upkeep of membership records, proofread Freethought Today and occasionally make tea (but not nearly as well as Jackie).

What I like best about it: On the first day I walked into the Foundation office, I felt a palpable sense of relief at being in an environment where nobody else believes in God and everyone is dedicated and working hard to keep religion out of government and every other place it doesn’t belong. The air is actually easier to breathe, and the entire staff is hardworking, well-read (far more than I) and good-humored.

Something funny that’s happened: We occasionally get a good laugh reading letters and e-mails from frothing-at-the-mouth god-fearing folk who work themselves into semi-literate, profanity-laden frenzies over something they’ve read or heard about the Foundation. And then we make sure the front door is locked.

My day job is/was: I worked for several years as a psychologist at a community mental health center in Pittsburgh. I then worked as a litigation attorney in Los Angeles for 20 years, first in admiralty and maritime law and then insurance defense, primarily defending attorneys sued for malpractice.

Education (formal and informal): I was an Air Force brat and we moved every other year, so I grew up learning how to adapt to new situations and not being afraid to make changes. I have B.A. and M.A. degrees in psychology from San Francisco State University (a great place to be in the ’60s) and a J.D. from Loyola Law School in Los Angeles.

These three words sum me up: Modest, humble and sarcastic.

My freethought heroes are: First of all, my husband, who is an atheist to the very marrow of his bones. After that, it’s everybody at the Foundation — in particular, the tireless and unrelenting Annie Laurie Gaylor and Dan Barker.

Things I like: Cooking, eating, weekend drives on back-country roads with my husband, and outwitting the squirrels that raid my bird feeders.

Things I smite: The for-profit health insurance industry.  Wall Street investment bankers, money managers and corporate CEOs who trashed our economy for their own personal profit, were bailed out with tax dollars, didn’t have the good grace to jump off a building, and are still skimming off billions of dollars in compensation and bonuses for themselves. A run-amuck U.S. Supreme Court majority that is hell-bent on granting constitutional rights to corporations and stripping them from actual people.  Everyone associated with “The Family” and the C Street House.  Anyone who thinks Social Security should be privatized.  Shall I go on?