Can You Be Good With God? 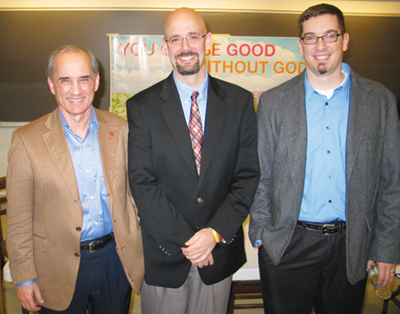 A threat as severe as a severed horse’s head in his bed, it likely wasn’t, or was it?

An October debate between Found­ation Co-President Dan Barker and evangelical Pastor Dan Waugh at Indiana University in Bloomington had “varying moments of humor and tension,” said an account in the Indiana Daily Student.

“Barker drew surprised gasps from some audience members when he called out Waugh for practicing faith in vain, calling his God a ‘petty, vain, insecure, egotistical being.’ ”

The debate’s focus was the atheist bus ad campaign that says “You can be good without God.” The issue was the moral question posed by the bus ad but not the pros and cons of the ad.

“I’m not against the campaign at all,” Waugh said. “It allows for this debate; it is not a threat.”

Then, the paper said, the mood changed with a crisp question in the debate’s morality play. “If God told you to, would you kill me?” Barker asked.

Many in the audience of about 200 laughed, and Waugh paused before answering, “If there was a specific verse saying Dan Waugh should kill Dan Barker, then I would have to consider it,” Waugh responded, to more laughter.

Is Barker looking over his shoulder more these days?