The Freedom From Religion Foundation, a national state/church watchdog, filed a federal lawsuit on Dec. 26 challenging the unlawful display of a contentious manger scene at the entrance of City Hall in Green Bay, Wis.

Our legal action was driven by local residents," said Annie Laurie Gaylor, Foundation co-president. "Many Green Bay citizens contacted us over their dismay that city government would thumb its nose at the constitutional principle of state/church separation, and deliberately provoke a divisive controversy in Green Bay."

"We're grateful not just to our named plaintiffs, who include Foundation members--a Lutheran, a Buddhist, an Episcopalian, a Wiccan and a Unitarian Universalist--but to the many others who volunteered to be plaintiffs, if needed," said Foundation co-president Dan Barker.

City Council president Chad Fradette decided to erect the nativity scene to pick a fight with the Foundation, after the Foundation complained over an unlawful creche displayed by the city of Peshtigo, Wis. (See below.)

"So now the Freedom From Religion Foundation can pick on somebody a little larger than Peshtigo," Fradette said.

"I'm trying to take this fight to the people who need to be fought. I'll keep going on this until this group imposing Madison values crawls back into its hole and never crawls out," he added.

At the council meeting on Dec. 11, Fradette got permission from the mayor and the Advisory Committee, which he chairs, to place the Christian display. The Foundation alleges this involved an open records violation. It took an hour for Fradette, council vice president Chris Wery and two city maintenance workers to install the display atop the entry overhang, as the mayor watched. It is illuminated with spotlights.

The Foundation immediately asked the city to remove the unconstitutional display, pointing out the Supreme Court has specifically ruled that a nativity scene cannot be placed by the entrance of a core governmental building.

Numerous residents either objected, or requested adding other religious symbols or displays to counter the nativity display. Mayor Schmitt briefly let a wreath with a pentagram be placed by a Wiccan several days later. After it was vandalized and removed, Schmitt imposed a "moratorium" on the addition of other symbols.

"Council President Fradette deliberately used his public office to place an inherently Christian symbol prominently on government property at the entrance to City Hall, the principal location of local government, rather than on his private property, precisely in order to antagonize, offend and challenge those persons who object to the public sponsorship of religious symbols on public property," the Foundation legal complaint states.

"Public and private communications by the Defendants reflect their intent to provoke and marginalize persons who do not share their views regarding the public display and promotion of religion by the City," the complaint charges.

The United States Supreme Court has ruled that it is a violation of the Establishment Clause of the First Amendment to the U.S. Constitution to place a nativity scene as the sole focus of a display on government property.

Even in Lynch v. Donnelly, in which the Supreme Court in 1984 approved a nativity scene as part of an overall secular display in a park, the Court cautioned:

"The display of religious symbols in public areas of core government buildings runs a special risk of 'mak[ing] religion relevant, in reality or public perception, to status in the political community.' "

In County of Allegheny v. ACLU of Pittsburgh (1989), the high court explicitly ruled that a nativity scene may not be placed at the entrance of a public building, even with a menorah.

The mayor, in an open letter to Green Bay citizens prior to the Foundation's lawsuit, claimed "the City of Green Bay finds itself embroiled in a controversy over its government-sponsored Christmas holiday display and under attack from the Freedom From Religion Foundation."

Schmitt added: "My efforts toward a Christmas display were trivialized by requests to add decorations representing false holidays like 'Festivus' or fake religions like the Church of the Flying Spaghetti Monster."

Repeating that the Foundation is "attacking the City of Green Bay and its citizens," Schmitt stated:

"FFRF aspires to a world free of religious belief. I believe those intentions threaten a vital part of the goodness of humanity and what makes this city great."

Schmitt proposed turning the roof of City Hall into a "public forum," but only in December and only for religions he considered bonafide.

He refused requests by plaintiffs Taku Ronsman and Wendy Coriell to place symbols, one a peace symbol, the other meant to protest the violation of separation between church and state. Additionally, plaintiff Michael Bergman, who had expressed concern to the city over the Christian endorsement, asked if he could display a Buddhist symbol in May to coincide with the birth of Buddha.

The Foundation charges that "objectors and dissenters are shown to be political outsiders and discouraged from challenging the official view that public sponsorship of religious displays is an appropriate exercise of government authority."

"The Defendants' actions constitute government speech deliberately intended to be broadcast as officially accepted dogma, and which hostile message is intentionally directed at political outsiders," the complaint continues.

The legal complaint was filed by attorney Rich Bolton on Dec. 26 in the U.S. District Court, Eastern District of Wisconsin. 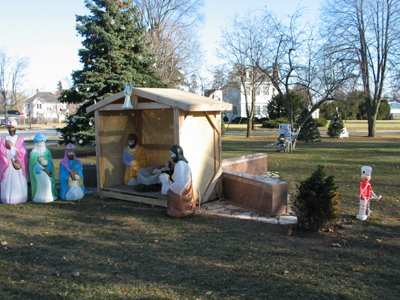 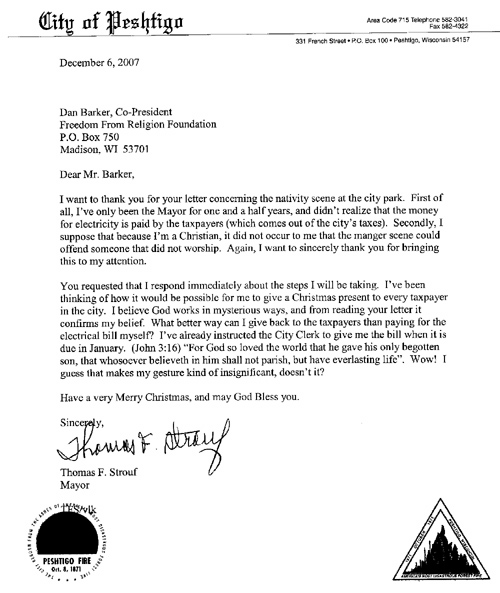