The Case in Support of the Johnson Amendment 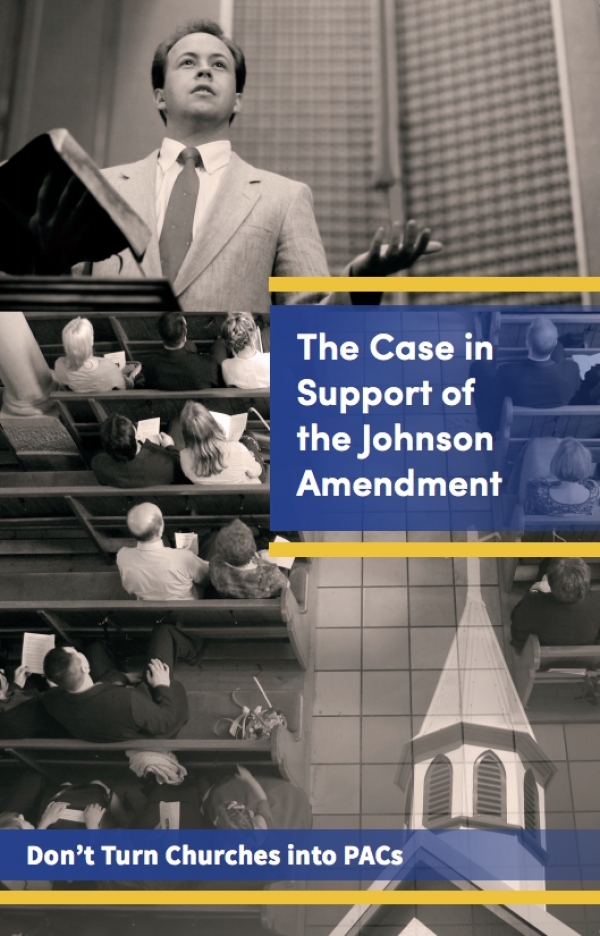 Four out of five Americans oppose politicking from the pulpit, according to a 2016 survey by LifeWay Research, the Southern Baptist Convention's research arm. Fully 79 percent oppose pastors endorsing candidates during a church service. More than 8 in 10 believe it's inappropriate for churches to use their resources for political campaigns. 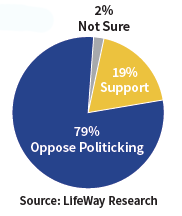 The Pew Research Center confirms that "most Americans oppose political endorsements from churches." Pew Research found that only 33% of Republican respondents, and 26% of Democrats approved of churches endorsing political candidates.

Pastors and clergy are free to personally endorse and support candidates, and often do. Under the Johnson Amendment, they can also sermonize or comment on moral issues (war, abortion/contraception access, civil rights, poverty, etc.). They can even comment on the job performance of public officials. They can engage in nonpartisan "get out the vote" campaigns.

Why does the Johnson Amendment prohibit politicking?

Being a tax-exempt 501(c)(3) — in which donations to the organization are tax deductible — is a major privilege. American taxpayers essentially subsidize 501(c)(3)s, with the understanding that they will engage in charitable or educational endeavors, not political campaigning. It would undermine the very nature of 501(c)(3)s to funnel tax-exempt money to political campaigns or use tithes for partisan purposes. The Johnson Amendment is a neutrally applied law that properly bars any (c)(3) nonprofit, not just churches, from engaging in partisan politicking.

What would repeal of the Johnson Amendment (HR 172) do?

• Convert churches into unaccountable PACS. (Churches are financial black holes, uniquely exempted from filing the Form 990 tax return that other (c)(3) groups must file with the IRS. Church donations to political campaigns would be uniquely untraceable and unregulated.)

• Allow any 501(c)(3) nonprofit (not just churches) to campaign on behalf of candidates.

What would the so-called 'Free Speech Fairness Act'

Johnson Amendment is not broken — no need to "fix"

• The Johnson Amendment isn't a threat to our democracy. But allowing tax-exempt entities to engage in political campaigning would be. It would destabilize our political system by creating an avenue for unregulated money to finance political campaigns with zero accountability.

• Repeal of the Johnson Amendment would also negatively impact churches. Inevitably "less tax-deductible contributions would go to churches and charities for their core activities, especially in election years," observes Father Thomas Reese (National Catholic Reporter, 2/9/17). "Money would be diverted from churches and charities to tax exempts devoted to politics."

What others are saying in support of the Johnson Amendment

"For 60 years, this law has played an essential role in maintaining public confidence in, and support for, the charitable community. . . . Allowing the endorsement of political candidates is tantamount to allowing political agents to use the public's goodwill towards the charitable sector as a vehicle to advance, through financial contributions, their own partisan political will."
— Daniel Cardinali, president and CEO of Independent Sector

"Nonpartisanship is vital to the work of charitable nonprofits. It enables organizations to address community challenges, and invites the problem-solving skills of all residents, without the distractions of party labels and the caustic partisanship that is bedeviling our country."
— Tim Delaney, president of the National Council of Nonprofits