The Case Against Vouchers

Voucher programs run counter to founding principles of the United States. A cornerstone of America is our "common school" — free, publicly supported schools open to all children regardless of social class, religion, ethnicity, gender or country of origin. America forged the very concept of universal education. Another foundation of our republic is the guarantee of government accountability to citizens about where their taxes go.

Many Americans are alarmed at proposals to de-fund public schools, where 90 percent of students are enrolled. Proponents of vouchers, in openly seeking to "privatize" education, are attacking treasured American principles. The 25 voucher programs in 14 states as of early 2017 divert ever more taxpayer funds from public schools. Yet such schools remain free to exclude students, disregard regulations, provide little accountability and indoctrinate students at public expense.

The lack of oversight of voucher schools encourages widespread fraud and mismanagement. Taxpayers cut the checks to voucher schools, yet have no say in how they are run. Public schools are managed under democratically elected school boards that assert public oversight. Citizens have no means to review voucher school records, attend meetings, or otherwise gather information about school operations or provide input.

Taxpayers cannot afford to pay for a dual-education system

• Once voucher programs are in place, politicians have changed the rules to allow for rapid voucher expansion. For example, Arizona recently expanded its voucher pro-gram to allow parents, regardless of income level, to take state money that would go to local public schools and in-stead use it for a private religious education. (13)
• Vouchers have turned self-sufficient churches into publicly subsidized institutions. A recent study of Catholic parishes in Milwaukee highlights the problem. According to a 2017 study by Daniel Hungerman of the University of Notre Dame, "the typical parish accepting vouchers received more money through that avenue than from offertory donations." (14) 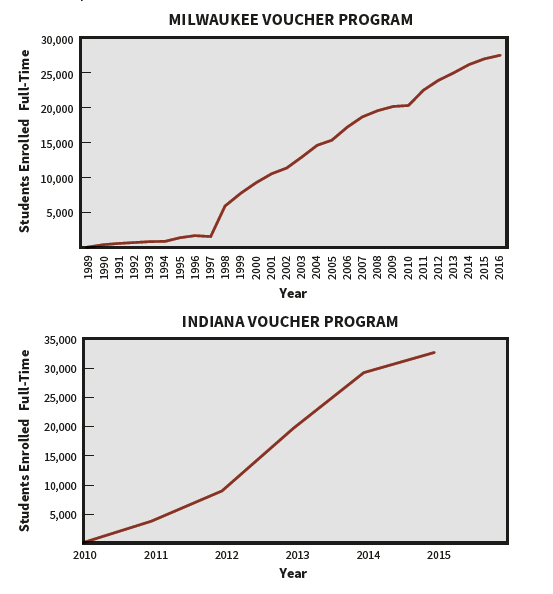 The voucher movement is not truly championing "choice" or lifting up disadvantaged students or students of color. It is using disadvantaged youth as pawns in a cynical ploy to divert funds from public schools to private, mostly religious schools. Current federal proposals even call for raiding Title I funds intended for support of low-income students to give to private schools.

How do unregulated voucher schools operate?

Because private schools receiving vouchers are not subject to the safeguards required for public schools, abuses are rife. Examples include:

President Donald Trump, in his March 1, 2017, address, urged Congress to pass federal tuition tax credit vouchers. The situation in Arizona, which has one of the oldest, largest tuition tax credit voucher programs, is a cautionary tale, where students receiving them increased from 50,000 in 2005 to 256,000 in 2017. Arizona taxpayers or corporations may donate money to nonprofit voucher-granting groups, then claim a 100 percent, dollar-for-dollar credit against their state taxes. (E.g., if you donate $1,000 to the voucher nonprofit, you subtract 1,000 from your taxes.) The nonprofit transfers money to families to pay for tuition at private schools, but may keep 10 percent to pay overhead. Over $100 million per year is given to finance vouchers for private schools.

The New York Times has chronicled the shocking way Steve Yarbrough — who as president of the Arizona State Senate promoted the tuition tax credit system — has personally profited. "The fact that an influential politician can both promote and profit from tax credit vouchers shows what can happen when public funding for education is largely removed from public hands," writes Kevin Carey. (23)

Already 17 states off er some type of scholarship tax credit, according to the National Conference of State Legislatures.25 Other schemes include direct public tax credits or deductions for families with a child attending a private school, and education savings account that may be used to pay for private or religious school tuition, or even make all gains free from federal taxation.

Decisions on education funding and policy have traditionally been left to state and local governments. The Trump proposals would involve massive federal interference in state and local governments. Many state constitutions wisely prohibit the state from providing aid to religious schools. Federal voucher legislation must not infringe on these state constitutional protections.

Our public school system is a pluralistic institution where all students are welcome regardless of their background or religion. Voucher schools are heavily segregated on the basis of religion. Voucher schools have few barriers to prevent them from discriminating in hiring or student admissions on the basis of religion, sexual orientation or disability. In contrast, public schools must provide a free and appropriate education to all students, including those with disabilities.

"They can discriminate based on religion, or disability or language needs," notes Lily Eskelsen Garcia, president of the National Education Association. "That is the exact antithesis of a public school." (26)

Vouchers mix church and state, and hurt both

Voucher schemes are a backdoor means of funding religious schools with taxpayer money, undermining the principle of separation of state and church. They benefit those denominations that have the most private school infrastructure in place.

Congress and states should reject vouchers and tuition tax credits and protect public education, heed-ing the wise words of the father of the U.S. Constitution, James Madison, who noted: "Religion and government will both exist in greater purity, the less they are mixed together." (27) 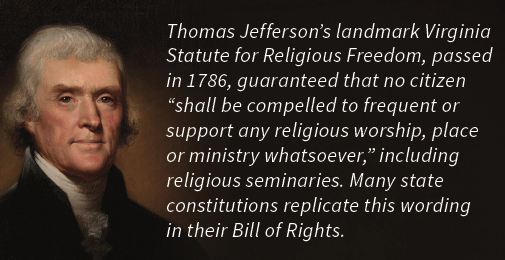