What Does the Bible Say About Abortion? 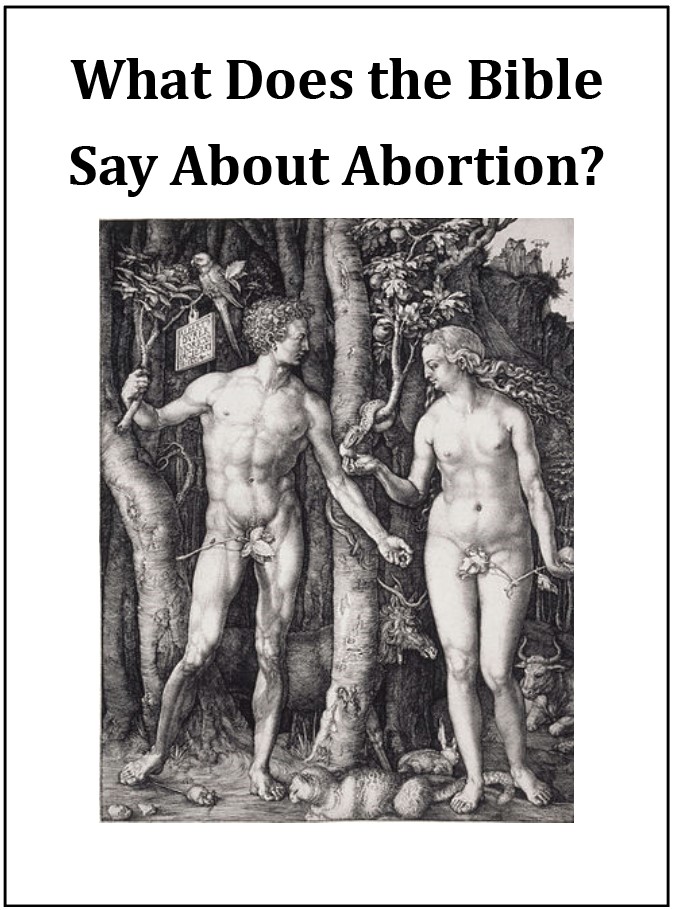 The nontract below may be read online for personal viewing and reference. They are copyrighted and belong to FFRF. All right reserved. This material may not be reprinted or distributed without the express written permission of the Freedom From Religion Foundation. FFRF makes these nontracts available in brouchure form by the dozen or in bulk to make distribution cost-effective and easy.

What Does the Bible Say about Abortion

Absolutely nothing! The word "abortion" does not appear in any translation of the bible.

Out of more than 600 laws of Moses, none comments on abortion. One Mosaic law about miscarriage specifically contradicts the claim that the bible is antiabortion, clearly stating that miscarriage does not involve the death of a human being. If a woman has a miscarriage as the result of a fight, the man who caused it should be fined. If the woman dies, however, the culprit must be killed:

"If men strive, and hurt a woman with child, so that her fruit depart from her, and yet no mischief follow: he shall be surely punished according as the woman's husband will lay upon him; and he shall pay as the judges determine.

When Does Life Begin?

According to the bible, life begins at birth--when a baby draws its first breath. The bible defines life as "breath" in several significant passages, including the story of Adam's creation in Genesis 2:7, when God "breathed into his nostrils the breath of life; and man became a living soul." Jewish law traditionally considers that personhood begins at birth.

Desperate for a biblical basis for their beliefs, some antiabortionists cite obscure passages, usually metaphors or poetic phrasing, such as: "Behold, I was shapen in iniquity; and in sin did my mother conceive me." Psalm 51:5 This is sexist, but does nothing other than to invoke original sin. It says nothing about abortion.

Moses, Jesus and Paul ignored every chance to condemn abortion. If abortion is so important, why didn't the bible say so?

Thou Shalt Not Kill?

Many antiabortionists quote the sixth commandment, "Thou shalt not kill" (Ex. 20:13), as evidence that the bible is antiabortion. They fail to investigate the bible's definition of life (breath) or its deafening silence on abortion. Significantly, the Mosaic law in Exodus 21:22-25, directly following the Ten Commandments, makes it clear that an embryo or fetus is not a human being.

An honest reader must admit that the bible contradicts itself. "Thou shalt not kill" did not apply to many living, breathing human beings, including children, who were routinely massacred in the bible. The Mosaic law orders "Thou shalt kill" people for committing such "crimes" as cursing one's father or mother (Ex. 21:17), for being a "stubborn son" (Deut. 21:18-21), for being a homosexual (Lev. 20:13), or even for picking up sticks on the Sabbath (Numbers 15:32-35)! Far from protecting the sanctity of life, the bible promotes capital punishment for conduct which no civilized person or nation would regard as criminal.

Mass killings were routinely ordered, committed or approved by the God of the bible. One typical example is Numbers 25:4-9, when the Lord casually orders Moses to massacre 24,000 Israelites: "Take all the heads of the people, and hang them up before the Lord against the sun." Clearly, the bible is not pro-life!

Most scholars and translators agree that the injunction against killing forbade only the murder of (already born) Hebrews. It was open season on everyone else, including children, pregnant women and newborn babies.

"Happy shall he be, that taketh and dasheth thy little ones against the stones." Psalm 137:9

The bible is not pro-child. Why did God set a bear upon 42 children just for teasing a prophet (2 Kings 2:23-24)? Far from demonstrating a "pro-life" attitude, the bible decimates innocent babies and pregnant women in passage after gory passage, starting with the flood and the wanton destruction of Sodom and Gomorrah, progressing to the murder of the firstborn child of every household in Egypt (Ex. 12:29), and the New Testament threats of annihilation.

Space permits only a small sampling of biblical commandments or threats to kill children:

Numbers 31:17: Now therefore kill every male among the little ones.
Deuteronomy 2:34: utterly destroyed the men and the women and the little ones.
Deuteronomy 28:53: And thou shalt eat the fruit of thine own body, the flesh of thy sons and of thy daughters.
I Samuel 15:3: slay both man and woman, infant and suckling.
2 Kings 8:12: dash their children, and rip up their women with child.
2 Kings 15:16: all the women therein that were with child he ripped up.
Isaiah 13:16: Their children also shall be dashed to pieces before their eyes; their houses shall be spoiled and their wives ravished.
Isaiah 13:18: They shall have no pity on the fruit of the womb; their eyes shall not spare children.
Lamentations 2:20: Shall the women eat their fruit, and children.
Ezekiel 9:6: Slay utterly old and young, both maids and little children.
Hosea 9:14: give them a miscarrying womb and dry breasts.
Hosea 13:16: their infants shall be dashed in pieces, and their women with child shall be ripped up.

Then there are the dire warnings of Jesus: "For, behold, the days are coming, in which they shall say, Blessed are the barren, and the womb that never bare, and the paps which never gave suck." Luke 23:29

The teachings and contradictions of the bible show that antiabortionists do not have a "scriptural base" for their claim that their deity is "pro-life."

Spontaneous abortions occur far more often than medical abortions. Gynecology textbooks conservatively cite a 15% miscarriage rate, with one medical study finding a spontaneous abortion rate of almost 90% in very early pregnancy. That would make a deity in charge of nature the greatest abortionist in history!

Are Bible Teachings Kind to Women?

The bible is neither antiabortion nor pro-life, but does provide a biblical basis for the real motivation behind the antiabortion religious crusade: hatred of women. The bible is anti-woman, blaming women for sin, demanding subservience, mandating a slave/master relationship to men, and demonstrating contempt and lack of compassion: "I will greatly multiply thy sorrow and thy conception; in sorrow thou shalt bring forth children; and thy desire shall be to thy husband, and he shall rule over thee." Gen. 3:16 What self-respecting woman today would submit willingly to such tyranny?

The antiabortion position does not demonstrate love for humanity, or compassion for real human beings. World Health Organization estimates maternal deaths at 500,000 a year, with at least one in five stemming from unsafe, illegal abortions. Thousands more are hurt and maimed from illegal or self-induced abortions. Unwanted pregnancies and complications from multiple pregnancies are a leading killer of women. Why do antiabortionists want North American women to join these ghastly mortality statistics? Every day around the world more than 40,000 people, mostly children, die from starvation or malnutrition. We must protect and cherish the right to life of the already-born.

Numerous Christian denominations and religious groups agree that the bible does not condemn abortion and that abortion should continue to be legal. These include:

Is America Governed by Religious Faith?

Belief that "a human being exists at conception" is a matter of faith, not fact. Legislating antiabortion faith would be as immoral and unAmerican as passing a law that all citizens must attend Catholic mass!

The bible does not condemn abortion; but even if it did, we live under a secular constitution, not in a theocracy. The separation of church and state, the right to privacy, and women's rights all demand freedom of choice.