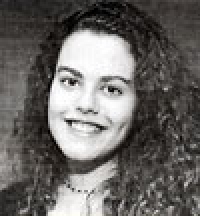 Rachel Bauchman spoke at the nineteenth annual convention of the Freedom From Religion Foundation in Madison, Wisconsin, on October 12, 1996. At that time, she was a 17-year-old senior in high school, taking music honors.

When she and her family politely objected at every level of her public school system in Salt Lake City, Utah, to pervasive religion in her choir class and related activities, she received "threats, accusations, rumors, religious slurs [on] an everyday occurrence, . . . I was told to go back to Israel, called a Dirty Jew, Jew bitch, and informed that it was too bad Hitler didn't finish'the job.' My motives, personality, physical appearance, religious beliefs, citizenship status, my parents, you name it, were discussed, debated and bandied about on radio talk shows, on television newscasts, and in newspaper articles."

With the help of a civil liberties group, she filed a federal lawsuit when two proselytizing Christian songs were made part of the high school graduation, and won an injunction halting the songs. A postscript: Ms. Bauchman subsequently lost the appeal of her dismissal of her case before the federal appeals court in Denver.