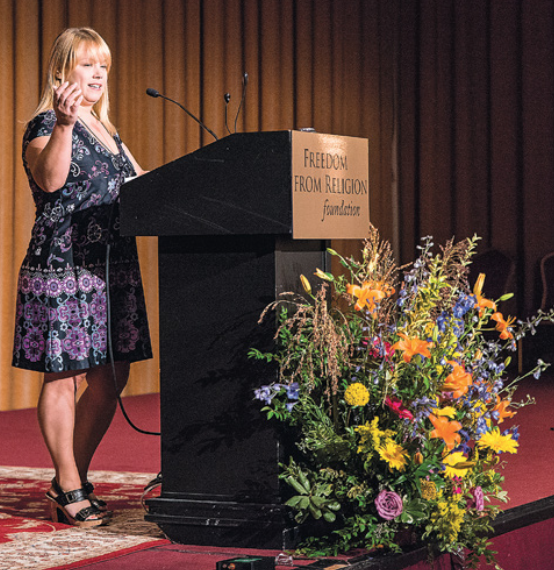 Marie Schaub is a plaintiff in FFRF's case over a Ten Commandments monument in Pennsylvania's New Kensington-Arnold School District. In August, FFRF won an appeal in the case, overturning the initial judge's ruling that she (and her daughter) did not have legal standing. She is the only publicly named plaintiff in the case and has been vilified because of it. Marie gave the following speech on Oct. 8 during FFRF's 39th annual national convention in Pittsburgh.

Listen to the audio here.

She was introduced by FFRF Staff Attorney Patrick Elliott:

While small in stature, Marie Schaub will be the force behind lifting two tons of granite. Her case against a school district over its Ten Commandments monument is not completed, but is nearing its conclusion. In the process of challenging the school system, Marie has endured community backlash, yet she has not wavered in her dedication to enforcing the Constitution. I am pleased to present Marie with FFRF's Atheist in Foxhole Courage Award, which is given to those who have demonstrated exceptional courage.

I can remember the first time I saw the nearly 6-foot-tall statue of the Ten Commandments in front of Valley High School. I was confused and sickened, but I didn't think there was much I could do about it.

When I heard that a group that shared the same ideas about religion in our government was looking for other people who opposed the 2,000-pound monument, I was instantly relieved and excited to be a part of such an important cause. I thought for sure FFRF's phones were already ringing off the hook with willing participants who also wanted the decalogue relocated.

Well, I soon found out that not only was my atheist family seemingly alone in our town, but we were very unwanted. One of the first signs indicating that we were not welcome came from the school administrators themselves. The New Kensington-Arnold School District's superintendent took to Facebook like Donald Trump takes to Twitter.

Superintendent John Pallone posted a long status about the monument, saying how the district would defend its religious rock against the evil, out-of-town atheists from Wisconsin — completely ignoring the fact that at least four members of my family who live in the district were included in the complaint. The superintendent prior to John Pallone was George Batterson, and he also expressed his religious duty to defend the Ten Commandments, as revealed in private emails to his sister. So it's apparent that there is a long history of bigotry at Valley High School in New Kensington.

Everyone involved in the lawsuit was subjected to what I would call a necessary invasion of privacy. Every email, text, social media post, private message, etc., that had anything to do with this case was permissible in court, unless it was a correspondence with an attorney. Always be mindful about what you do online. You never know when it will become part of the public record.

At the beginning of this process, I had to hand over all of my electronic accounts, along with my user names and passwords, to our attorneys and their assistants. Thanks to FFRF, I've been able to work with Marc Schneider and his team at Steele Schneider in Pittsburgh. They've been more than professional while dealing with thousands of pages of materials the district and I have provided for them to sift through. It was certainly an uncomfortable experience to have my personal messages and emails examined, but I realized it was a temporary inconvenience and a small sacrifice, considering what was at stake.

Others in my neighborhood found social media and letters to the editor as an outlet to vent. Almost daily, there was a new article or post complaining about my complaint. I recall one post that said my "whole family should be taken out into the street and shot." Many people wrote that we should leave the country if we don't like it. Some of the crank mail I've received has been both threatening and laughable at the same time. It's because of these threats that I requested my daughter not be named in this lawsuit, and the judge agreed to allow my child to proceed as Doe 1.

As someone who's always been outspoken and a bit feisty, I felt it was in my best interest to be named in this complaint because I knew I'd have a tough time keeping my mouth shut. I'm not shy about expressing my nonbelief and I share my opinions about it with whoever is willing to listen. I don't try to convert people by openly advertising that I'm an atheist; my objective is to let other people like me know that they're not alone.

Not only has this case caused problems with the school and the community, it's also affected some of my personal relationships. In the beginning, tensions ran high. Everyone had an opinion. Even though a lot of my friends said that they agree the monument is in an inappropriate location, they expressed their distaste for my objection. I've lost a couple of so-called friends over it, but in my opinion, if this subject has caused them to avoid me, they obviously weren't that good of friends in the first place.

You see, there's just no nice way of telling someone that they're full of shit. But I try, and you should, too. I really put a lot of effort into criticizing the belief — not the believer — in spite of some of the colorful names I've been called. I struggle with it daily, but I think it's important to focus on the discrepancies and negative effects all religions have on our society, not just the Christian faith. Christians seem to feel they are the most oppressed majority in America.

In response to our combined complaint, a few church leaders formed a little group called "Thou Shall Not Move." They fashioned cardboard cutouts of the Ten Commandments, which are displayed in people's yards all over town, including my neighbor's directly across the street from me. It's my understanding that they were going to use the raised money to help fund the legal defense of a similar monument at another public school approximately 45 minutes away in Connellsville. But that's already been ruled unconstitutional and relocated, so the group is now seeking to donate several monuments to private organizations, which is fine by me.

Just as I believe we need to appeal to moderate Muslims to address radicalism, I think we should approach moderate Christians who value the separation of state and church. Many Christians who insist on injecting their religion into our secular lives seem to be driven by fear and ignorance. If only they could see that the tiny holes they put in the wall of separation are the cracks that could pave the way to the Sharia law that they are so afraid of. Maybe then they might be more inclined to respect our right to freedom from religion.

Despite being ostracized by my community and chastised by my acquaintances, I'm here to tell you that speaking out is well worth it, and I would do it all over again. While I may have lost a few friends along the way, it pales in comparison to the awesome support my family has received as a result. Before I found FFRF, I felt isolated and alone, but being part of the largest group of freethinkers in North America is comforting, inviting and gives me hope for the future.

We're all well aware of what's been done to nonbelievers in the past. Even today, in many countries, expressing opposition to religion can be deadly. Luckily, in the United States, most religious fanatics have barks that are bigger than their bites. From what I've seen, the irrational evangelicals resort to vandalism of godless billboards and displays or push empty threats. So please don't let that scare you away from properly reporting any violations that marginalize minorities. And please don't stoop to their level.

And that brings me to another point. I'm not sure if you've noticed, but apparently if you've come out of the closet as a nonbeliever who thinks religion is harmful, you are called a "militant atheist." But those who told me I should leave the country and die are considered "true Christians." Don't get me wrong, I have plenty of friends who are believers, but I've never gotten death threats from a Muslim, Jew or Hindu, and I've yet to witness any of those groups violate the separation of state and church. If I did, I'd speak out against those, too.

We live in the Information Age and I think these are very exciting times. We're no longer isolated and, thanks to the internet, nonbelievers and freethinkers can have a major positive impact on our society. But just like I never thought I'd live to see marijuana legalized — anywhere — I am optimistically skeptical I'll see the complete decline of religion in my lifetime.

I understand some people cling to the supernatural as a source of comfort or as a way to hand down traditional rituals, but being ignorant about social issues and equality in today's age is a conscious choice.

When we filed this lawsuit in 2012 — yes, more than four years ago — my daughter had just started middle school. We knew eventually she'd likely be attending Valley High and would have that enormous statue facing her as she entered the school every day. The time came for her to start high school, but it was then that we decided to send her to a neighboring school district where her dad resides to avoid the situation altogether. After years of continuances and briefs, Judge Terrence McVerry found that we did not have legal standing in this case because our unwanted contact with the monument was infrequent. We were disappointed, but not deterred.

FFRF and Patrick Elliott were with my family and me throughout this entire process. Annie Laurie Gaylor and Dan Barker were more than helpful during this time, especially when I told them we were interested in staying the course and appealing the district court's decision. We immediately filed an appeal, along with several unexpected friends of the court. I'd like to personally thank Americans United for the Separation of Church and State, the Anti-Defamation League, the Central Conference of American Rabbis, the Jewish Social Policy Action Network, the Sikh Coalition, the Union for Reform Judaism, and, of course, the Freedom From Religion Foundation!

After four years of lengthy litigation, I didn't expect to make much progress, but this past summer the Court of Appeals, which included a panel of three judges, unanimously sided with us on the issue of standing. One of the judges noted how the unwanted contact didn't have to be as frequent as the previous judge had ruled and remanded the case back to district court to be heard on the case's merits.

Apparently, the sitting judge who originally heard our request is about to retire, but in a surprising and recent change in events, reports say that the School District is considering alternative locations for their Judeo-Christian monument. Ultimately, we all want to be accepted and feel welcome. The only way to do that is through understanding and equality.

Be brave, stand up for your rights, even if standing up means taking a seat.