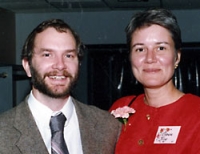 A recognition plaque was awarded at the seventeenth annual convention of the Freedom From Religion Foundation on October 1, 1994, to Drs. Joseph and Patricia King. The Kings were plaintiffs in a long fight funded by the Foundation to end village ownership and display of a nativity scene every year in Waunakee, Wisconsin. In June 1994, the Wisconsin Supreme Court upheld the display.

The Kings decided the time was not right to appeal to the U.S. Supreme Court, although it is hoped that in a few years, the Court may be willing to overturn the original Pawtucket case leading to serious entanglements around the country with public-displayed nativity scenes.

In awarding the plaque, Annie Laurie Gaylor recounted how the Foundation and the Kings became acquainted, how the entire village became arrayed against the Kings to the point that they felt they had to move away, and thanked them on behalf of the Foundation for being willing to change their lives in support of a constitutional principle.

Patricia King has a B.S. in Biology from Sienna College, New York and earned her Master's and Ph.D. in ecology at the University of Georgia. She has taught high-school biology and served in the Peace Corps in Zaire. Pat went on to graduate from the University of Wisconsin-Madison law school and to practice law.

Joe King received a Masters in Genetics from Iowa State University (1981) and a Ph.D. in Genetics from the University of Georgia (1986). He worked as a product manager and computer programmer for a genetics research company in Madison at the time of the award. The couple moved from Waunakee to Madison, Wisconsin, following religious harassment.