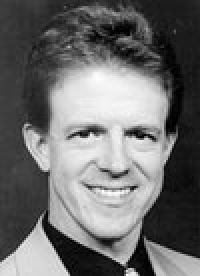 Steve Benson, the first grandson of the late head of the Mormon Church, Ezra Taft Benson, had been an editorial cartoonist with the Arizona Republic for 18 years at the time he received this award.

He has won many awards, including the 1993 Pulitzer Prize, and the 1997 Golden Spike Award for the best cartoon "killed" by an editor. He was incoming president of the American Association of Editorial Cartoonists in 1999.

Steve says his favorite saying is from Mark Twain: "Get your facts first, and then you can distort them as much as you please." His take on this is: "There's nothing so small that it can't be blown out of proportion."

Steve's editor's favorite saying is: "A picture is worth a thousand phone calls."

Today his cartoons are nationally syndicated in more than 120 newspapers. Following a cartoon barb at then-Phoenix mayor Paul Johnson, the city leader wrote Steve: "Your editorial cartoon was rude, crude, outrageous, inaccurate and poorly drawn. Could I have it for my office?"

Steve and Mary Ann Benson have four children, and more than 30 small animals (not counting their own kids). These include ferrets, tortoises, rabbits, hamsters, birds, dogs, iguanas and rats. Steve says working with animals helps him better understand politicians.

He also has the distinction of being a fully-sworn Arizona state police officer, volunteer reserve, in his home community in Gilbert. The self-described "coptoonist" says that when he pulls over motorists who ask why they've been stopped, he is tempted to ask: "Do I have to draw you a picture?"

He and his wife resigned from the Mormon Church in the mid-1990's, "a gesture which took a lot of courage and attracted a lot of attention," the Freedom From Religion Foundation pointed out in awarding him the "Tell It Like It Is" Freethought in the Media Award. Steve counts reading his hate mail as a hobby. Steve accepted his plaque in person at the December 1999 national convention of the Freedom From Religion Foundation in San Antonio.