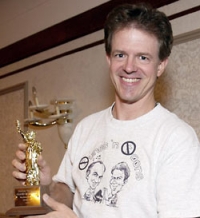 The inspiration for the Foundation's "Friend of Freedom" award, a statuette of liberty, came from an editorial cartoon in 2003 by Steve Benson, a Pulitzer Prize winning daily editorial cartoonist. (In this cartoon, filmmaker Michael Moore was pictured at the Academy Awards, where he won an Oscar for "best documentary," holding not an Oscar but a tiny replica of the Statue of Liberty.)

The Freedom From Religion Foundation thought it only fair to present its "Friend of Freedom Award," recognizing supporters of the First Amendment, to Steve.