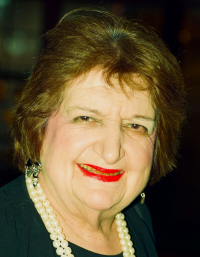 She was a copygirl at a Washington newspaper, then joined UPI in 1943 as a radio and news writer covering government. Helen Thomas was permanently assigned to the White House in 1961, becoming the first woman White House Correspondent.

She has written two books about her experiences as fearless White House correspondent: Front Row at the White House, followed by Thanks for the Memories, Mr. President. (Her publisher suggested she try a lighter book about presidents who have known her.)

A colleague who interviewed Fidel Castro once asked Castro what is the biggest difference between being president of Cuba and being president of the United States. Castro replied without hesitation: "I don't have to answer questions from Helen Thomas."

In 2000, Ms. Thomas resigned from UPI after it was purchased by the Unification Church. That year she became a columnist for Hearst Newspapers. "Maybe you remember the first Helen Thomas column you ever read. I remember being bowled over, and re-reading the byline several times, wondering if this could be 'the' Helen Thomas," said Annie Laurie Gaylor, in introducing her at the 2003 national FFRF convention in Washington, D.C. "What a welcome revelation! She has been tenacious and unrelenting in her condemnation of faith-based funding schemes, of our 180-degree changes in foreign policy to endorse preemptive strikes, of the war and of the secrecy and unanswered questions behind the war. Helen Thomas could be resting on her laurels; instead she is plunging into the fray, as the conscience of Washington, D.C." 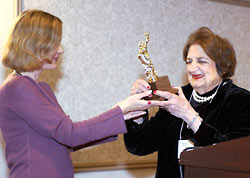 This spring Washington Post columnist Nora Boustany called Helen Thomas "a giant in American journalism." She said Helen "defines her role with spunk, savvy, and class and sets the standard for directness in inconstancies in American foreign policy."

The National Organization for Women fittingly awarded her with its "Intrepid" award. She speaks before diverse audiences and a few weeks before attending the Foundation convention, was in Provo, Utah, speaking to Brigham Young University. There she had the temerity to remark that George W. Bush is the most conservative president she has ever covered. For that and similar remarks, there was a noisy walk-out by a minority of students. Ms. Thomas turned to her moderator and asked: "Am I in enemy territory?"

"When she called to accept our invitation, Ms. Thomas wanted the Foundation to know that she describes herself as a non-denominational believer. The reason we want to recognize her is precisely because she is such an ardent believer in the separation of church and state, the Bill of Rights, our U.S. Constitution, the rule of law, open government, patriotic dissent and all the best ideals behind the United States of America," Gaylor added. "We are so pleased Helen Thomas is here tonight with us to be our very first recipient of our 'Friend of Freedom' award."