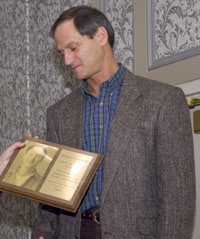 In introducing the award, Foundation staffer Annie Laurie Gaylor recounted some of the history of Mike's historic challenge. She noted:

"Wrote Greenhouse: 'no one who managed to get a seat in the courtroom is likely ever to forget his spell-binding performance.'

"Nina Totenberg, of National Public Radio, who has been watching the Supreme Court for 30 years, hailed Newdow's performance as 'virtuoso.'

"Newdow, an emergency room physician with a law degree, encountered naysayers when he asked to argue his own case challenging 'under God' in the Pledge of Allegiance before the Supreme Court.

"After diligently rehearsing before several moot courts, Newdow opened his oral argument with a dramatic statement:

'I am an atheist. I don't believe in God. And every school morning my child is asked to stand up, face that flag, put her hand over her heart and say that her father is wrong.'

"Newdow re-educated the country with his 'David and Goliath' victory in 2002, when the Ninth U.S. Circuit Court of Appeals ruled the 1954 addition of 'under God' in the Pledge of Allegiance unconstitutional. Countless articles and editorials since the ruling, which was upheld by the Ninth Circuit en banc in 2003, have reminded the public that the pledge, as written by liberal minister Francis Bellamy in 1892, was originally secular. The religious words were added after a campaign by the Knights of Columbus.

"Newdow effected another 'atheist miracle'--persuading Justice Anthony Scalia to recuse himself from the case. In an address to a Knights of Columbus rally in 2003, Scalia demonstrated he had prejudged the case. Newdow called him on it, and he willingly absented himself.

"The remaining Court did not let Newdow off lightly.

"The Chief Justice, feigning ignorance of the 1954 vote by Congress, asked Newdow what the vote had been 50 years ago. When Newdow confirmed it apparently was unanimous, Rehnquist replied:

"Replied Newdow: 'That's only because no atheist can get elected to public office.' When the courtroom erupted in applause, Rehnquist threatened to clear the room.

" 'There's a principle here,' he told the justices in his closing moments, 'and I'm hoping the court will uphold this principle so that we can finally go back and have every American want to stand up, face the flag, place their hand over their heart and pledge to one nation, indivisible, not divided by religion, with liberty and justice for all.' "