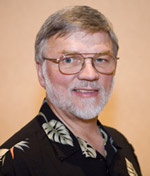 David Habecker was recalled from office last spring as a Trustee of the Town of Estes Park, Colo., for failing to recite the religious Pledge of Allegiance. The formal recall petition questioned his patriotism and even his "common decency." David, who has to earn a livelihood in his tiny community, has nevertheless spoken up to defend freedom of conscience. He was named a "Freethought Hero" at the Foundation's annual national convention in Orlando last November.

As attorney Robert Tiernan put it in his motion for summary judgment, if this tactic is permitted, "The door will be opened to a purge of public officials who do not believe in a divinity or that this is a nation subservient to a divinity. . . the state has no right to force a citizen to pay homage to a deity."

The Freedom From Religion Foundation joined as co-plaintiff in David's lawsuit seeking to declare the addition of "under God" in the Pledge of Allegiance unconstitutional, and to carve out protection for public officials exposed to the religious pledge. The district court ruled in the fall of 2006 against the standing of both Habecker and FFRF. Although FFRF has dropped out of the lawsuit, David Habecker is appealing the case to the 10th U.S. Court of Appeals.