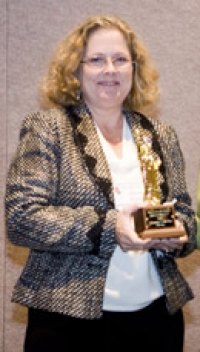 Dianna Narciso is a Foundation member and the mother of Daniel, who attends Palm Bay High, Fla. She was the first to blow the whistle in regard to the proselytizing setting of the Palm Bay graduation, asking the school a year before the graduation to change to a secular venue.

She is a founder of the Space Coast Freethought Association in Brevard, and is author of Like Rolling Uphill: Realizing the Honesty of Atheism. She also runs Florida Writes for the Wall, which is a letter-writing campaign to support state/church separation and the rights of nontheists.

"When we first invited Dianna to speak along with co-plainiff Jennifer Musgrove, recipient of our student activist award, we never realized how quickly the case would move, and that Dianna and her co-plaintiffs would win before our convention," noted Foundation co-president Annie Laurie Gaylor. In introducing Dianna at the national FFRF convention on Nov. 12 in Orlando, Gaylor added:

"We have a surprise for you, Dianna, our 'statuette of liberty,' the Friend of the First Amendment Award."