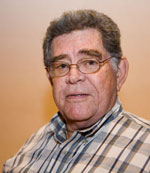 This is the introduction by Annie Laurie Gaylor for Don Addis' "Freethought in the Media 'Tell It Like It Is' Award," bestowed at the 27th annual national convention of the Freedom From Religion Foundation in Orlando, Fla., on Nov. 12, 2005.

Preceding the award was a crowd-pleasing presentation of some of Don Addis' many editorial cartoons on religious# and freethought topics.

One editorial cartoon is worth a thousand words, but I would like to use a few words to tell you more about our honoree, Don Addis.

First, Don is a member of the Freedom From Religion Foundation. Isn't that nice of him?

He recently retired as editorial cartoonist of The St. Petersburg Times, where he drew cartoons six days a week for 40 years. He first worked at the Independent but began his tenure at Times, one of the nation's best dailies, in 1986. He also drew a syndicated comic strip for many years, "Bent Offerings," a commentary on the "universal human condition."

Don was born in California but grew up in Hollywood, Fla. He is a graduate from the University of Florida, where he edited the campus humor magazine, The Orange Peel. He is an Army veteran. He was born on Friday the 13th and, being a good nonsuperstitionist, he retired on Friday the 13th!

I asked Don how many cartoons he has drawn over the years, and after working it out, he puts it at well over 11,500! That is a magnificent lifetime achievement--and you just saw about 60, a tiny fraction.

When he retired in August 2004, the editorial page editor of The St. Petersburg Times, Philip Gailey, wrote a lovely tribute to Don. Gailey wrote that they were devoting an entire op-ed page to Don's cartoons but that, unfortunately they didn't have the full collection to draw upon. "Don," his editor noted, "being the soft touch he is, would give an original cartoon to everyone who asked for it."

I can attest that he will send the original even if you don't ask for it! I remember a few years back when Don first sent me a few cartoons to reprint, how amazed I was that he had sent me the originals! FFRF is the fortunate keeper of many of the cartoons we laughed at tonight. One or two cartoons you didn't see are framed and hanging at our office. 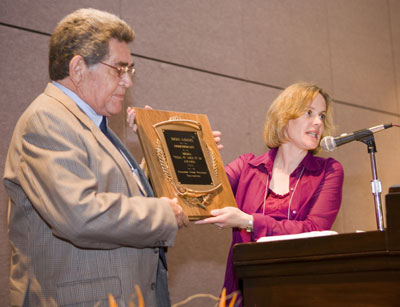 Don also wrote a monthly humor column for the Sunday Perspective section. One of his famous one-liners: "Where do card-carrying nudists carry their cards?"

A 1988 feature in The Times described Don this way:

"He paints faces on rocks. He collects stuffed gorillas. He keeps a false nose in his work drawer. One of his ancestors invented the toothbrush (maybe). He likes chess, crossword puzzles and palindromes. He juggles. He paints. He makes home movies (or used to). He mumbles, he paces and sometimes stares out the window. He listens to Mozart and Beethoven. . . . He doesn't care for politicians or Bucs football. Gun fetishists, creationists and bathroom humor are not high on his list, either."

His editor observed, "Unlike other cartoonists I have known, Don doesn't have an ego problem. Can you imagine an editorial cartoonist using his talent--and a Magic Marker--to illustrate the menu board in the company cafeteria? Don has been doing that for years." His editor called Don "our closing act" at editorial board morning meetings.

"Our board meetings will be a little more serious but not nearly as much fun without Don, who gave us what opinion pages are short on--a light touch. We will miss him a lot, and he leaves with our great affection and respect and gratitude. I don't know exactly what Don has in mind for his retirement years, but I have a feeling he is not about to stop making people smile."

Thanks, Don, for making them think, as well, and for your generosity in sharing even in your retirement your gentle but irreverent cartoons with Freethought Today.

Annie Laurie Gaylor is co-president of the Freedom From Religion Foundation, and editor of Freethought Today.