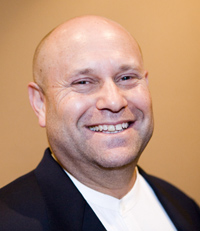 Michael L. ("Mikey") Weinstein filed suit in federal court in October 2005 against the Air Force to end illegal proselytizing and evangelizing. The lawsuit was recently thrown out on standing. In March 2006, Weinstein formed the Military Religious Freedom Foundation (www.militaryreligiousfreedom.org), a watchdog group.

He is an attorney and businessman who served on active duty in the United States Air Force as a Judge Advocate General (JAG) for ten years stationed at military installations. He served as a federal prosecutor and defense attorney, as well as the Air Force's first Chief of Telecommunications and Information Systems Procurement Law. He spent three years as an attorney in the Reagan White House serving in the Office of Management and Budget under White House Budget Director David Stockman and as Assistant General Counsel in the Executive Office. His book is With God on Our Side.