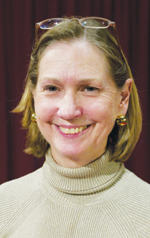 Our office has enjoyed Stephanie Salter's op-ed columns for the San Francisco Examiner and Chronicle for many years, and has corresponded a few times back and forth.

About three years ago, Stephanie Salter suddenly moved much closer to us--becoming assistant editor of opinion and commentary at the Terre Haute Tribune-Star, and moving back to her home state of Indiana. I had wondered how she was faring--seemed like a bit of culture shock would be involved, but we had lost touch.

Then this summer, Stephanie Salter was one of several editorial columnists in the country to write sympathetically about the Hein v. FFRF decision. These op-ed columns were very personally comforting to our office.

I knew from our correspondence that Stephanie Salter is a nominal theist. When we invited her to speak at our conference, I explained that the award we wished to bestow was first given to Helen Thomas, an Episcopalian, when she addressed our Washington, D.C., conference in 2002. Like Helen Thomas, Stephanie Salter "gets it"--she is an ardent supporter of the separation between church and state, and an astute observer and commentator. We are delighted to finally have a chance to meet Stephanie Salter after all these years, to give her our "Friend of the First Amendment" award and catch up on her "Life in the Heartland for a San Francisco Liberal."