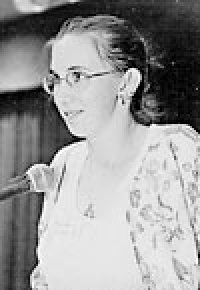 In April 1998, a 15-year-old student made national headlines for refusing to stand for the religious pledge of allegiance in her California classroom. Since then, MaryKait Durkee, with the support of her mother, Nann, and her grandfather, filed suit to successfully defend her right to freedom of conscience, with the help of the ACLU.

The Freedom From Religion Foundation made MaryKait Durkee its youngest recipient of the annual Freethought Heroine award, "in recognition of her defense of freedom of conscience." MaryKait accepted her award in person at the 1998 national convention of the Freedom From Religion Foundation, meeting in Madison, Wisconsin. At the time she was given the award, MaryKait Durkee was a 16-year-old junior at Fallbrook High School with dreams of becoming a veterinarian.

Thank you for this wonderful award and for inviting me to speak to you tonight. After the experiences of the past year, I appreciate deeply the work organizations like yours do to protect freedom of conscience and freedom of expression. For that reason, it is a genuine pleasure to address you. I've I been a bit surprised by the reaction to my case throughout the country, but I'm happy to say that most of the negative attention was limited to San Diego County, and the positive attention I received from the Freedom From Religion Foundation is much more typical of the letters I have received from people nationwide.

Your president, Anne Gaylor, asked me to explain the facts of my experience and then to talk about my perspective on them today. I'd like first to simply tell you how it happened.

I am currently in the eleventh grade at Fallbrook High School. Fallbrook is a rural medium-size town in the northern part of San Diego County. On April 1st of this year instead of standing to say the flag salute with the rest of my tenth-grade World History class, I chose to remain quietly seated. When my teacher motioned for me to stand after it had begun I shook my head no. Once everyone was seated again, my teacher asked me to stand and recite the Pledge of Allegiance by myself in front of the entire class. I said no quietly from my seat. He then told me I would receive detention.

That made me angry, so I stood up, walked up to his desk and told him he could not punish me for not participating in the flag pledge. At that point he sent me and another student to the assistant principal, Mrs. Rayl, and it was here that I began the process of appealing to the school in order to affirm my right to refrain from taking part in the Pledge of Allegiance. Neither of the two assistant principals was available at that time, but some members of the clerical staff told me on their behalf that I was required to stand during the pledge. That afternoon I obtained a copy of the district policy regarding patriotic observances. It said: "the district respects the legal right of individuals not to participate in the salute to the flag for personal reasons." I interpreted the policy to uphold my right to refrain from participation. The following day I showed the policy to my teacher and he let me sit during the pledge. The other students in my class were not bothered because I sat during the pledge. For a month I sat unnoticed by students or faculty. The controversy did not begin until the school administration made an issue of my nonparticipation.

After three weeks, I received Saturday School for "disrespect" during the pledge. I wrote a letter to Mrs. Rayl, asserting that I did nothing to deserve a Saturday School and it should be revoked. That same week, I met with Mrs. Rayl and we discussed the incident. At that time, there was a disagreement on the exact meaning of the term "participation." Although Rayl acknowledged that the policy allowed me to refrain from the pledge, she insisted that I stand during the flag salute, because standing without saying the pledge is not a form of participation. I disagreed. That afternoon my mother informed the principal that I would not stand for the pledge. He responded in writing that I must stand or face punishment.

We wrote a letter to the superintendent of Fallbrook High School requesting his authoritative opinion on the matter. After two weeks we had had no response and I was being forced to stand every morning.

We then decided to go beyond the school because they were not helping to resolve the issue. We contacted the American Civil Liberties Union of San Diego and Imperial Counties, and they were glad to help us. On May 28th, the ACLU filed a lawsuit. On July 21st, as you know, Fallbrook High School settled the case out of court, fully acknowledging the constitutionally protected right of myself, and all students to refuse participation in the Pledge of Allegiance. Currently every morning when my classmates stand and say the Pledge of Allegiance, I stay seated without any objection from my teacher.

Now I'd like to say a few words about why I decided not to say the pledge.

For seven years at the beginning of each school day I stood facing the United States flag and said the Pledge of Allegiance with my hand over my heart. I never gave it a second thought.

Then one day in late March I thought about what it meant. It seemed to be hollow and absurd.

I have several problems with saluting the flag, or even standing for it. The biggest problem I have with the pledge is the phrase "under god." I don't believe in god. Fallbrook High is a public school. And I think to have a phrase encouraging the belief in one benign god in a ritual carried out by students at a public school is inappropriate. I think it should be omitted.

I don't want to pledge my loyalty to the country I live in in an oath. That worked for Nazi Germany, fascist Italy and Imperialistic Japan, but it won't work in America.

If there were liberty and justice for all, the people who act, dress, think and look different would be an accepted part of society instead of being ridiculed for not blending with the crowd.

I don't like the idea of worshipping a piece of cloth. A lot of people thought I should at least stand in respect to the American flag. And it was argued that many Americans fought and died for the flag. But they fought to protect the Constitution and our freedom. Not to keep the flag waving.

It just seems so trivial.

After making these conclusions, I couldn't do it anymore. I couldn't just go along with something I so strongly disagreed with. I knew from the start that I could sit while everyone else stood and not be doing anything wrong. I didn't want to be disruptive. I didn't want a confrontation. But if I stood with everyone else it would contradict my principles and make me a weak person for not standing for what I believe is right. I never questioned whether my decision not to stand was right or not. I have always known it was right for me. All I wanted throughout the spring and summer was to have my rights respected.

Unfortunately, my school does not encourage independent thought or actions. Other students rejected me for my resolve. I was continually told to "stand up or shut up." Other students continually said the Pledge of Allegiance loudly when I walked by them between classes. In June my locker was covered in homemade stickers that said things like "respect," "stand up or shut up" and "one nation under God." Sadly, the Fallbrook High students followed the bad example set by the school's administration.

On the other hand, a couple of true friends and my family supported me throughout the experience, and I received a great number of supportive and encouraging letters from all over the country, some of which came from your organization. I know that I am not alone in my opinions or in my conviction that the true meaning of patriotism is the defense of the Constitution and its guarantees of personal and intellectual freedom. And that is why it gives me great pleasure to accept the honor that you have bestowed upon me this evening. Thank You.

Did you receive a monetary settlement?

Question about local support for MaryKait.

Nann: In Fallbrook, there really was no support at all. The first week letters were running something like 500 to one against us, just tons and tons of negative letters. We got all kinds of telephone calls. Someone even killed a bunch of my chickens--came into my yard in the middle of the night! That's the kind of town Fallbrook is.

This occurred two weeks before the school year ended. One of the district employees organized an exercise where 800 little American flags were given to students at the graduating class to wave (and to poke each other) and they were paid for by a very conservative assemblyman in our district.

Were any of the students sympathetic?

MaryKait: There were a few friends who did come forward, but most of the school was against me.

Nann: No, in fact, the day after the suit was filed the students organized a petition saying they thought MaryKait should stand, and it had over 500 signatures in a couple of hours. And they were very much encouraged by the local newspapers and by the community. In fact, I was copying some local papers in my local printshop and accidentally left a paper under the flap, and I was told after I left that a near-riot started in the printshop, with people yelling and screaming. It made me have quite a different view. I never know who's friendly and who's not. It has been quite an experience. It's been an eye-opener.