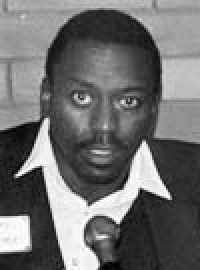 Calling him "an authentic American hero," the Freedom From Religion Foundation inaugurated the "Freethinker of the Year" award at its September 1985 convention to recognize the contributions of Ishmael Jaffree. As an agnostic, a father of six children and an attorney for a Mobile, Alabama Legal Services Corporation, Mr. Jaffree discovered in 1981 that his children were being fed daily doses of the Lord's prayer and grace at lunch, with an occasional bible-reading. After his complaints were ignored, he filed a lawsuit in May 1982 on behalf of three of his young children, challenging a 1978 law authorizing a one-minute period of silence, a 1981 statute authorizing a period of silence "for meditation or voluntary prayer," and a 1982 law authorizing teachers to lead "willing students" in a prescribed prayer to "Almighty God . . . the Creator and Supreme Judge of the world."

During the 1982 trial, the infamous Judge Hand permitted 600 Christians to intervene; school officials led children in prayer in front of the media. Jaffree's children were ostracized, laughed at, talked about, subjected to racial epithets and physically harassed. Judge Hand issued a ruling in 1983 against Jaffree, claiming the Supreme Court was wrong about the separation of state and church, and that the First Amendment does not bar states from establishing a religion. The case proceeded by way of the Eleventh Circuit to the U.S. Supreme Court. On June 4, 1985, the Supreme Court ruled 6-3 in Jaffree's favor, declaring unconstitutional a period of silence for "meditation or voluntary prayer" in public schools.

"I brought the case because I wanted to encourage toleration among my children. I certainly did not want teachers who have control over my children for at least eight hours over the day to. . . program them into any religious philosophy."