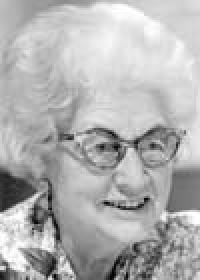 Retired schoolteacher, daughter of a former member of Congress and lifelong resident Phyllis Grams objected to the presence of a Ten Commandments monument on public property in Cameron Park, La Crosse, Wisconsin. She contacted Freedom From Religion Foundation president Anne Gaylor, who filed a high-profile lawsuit in federal court in September 1985, with Phyllis as principal plaintiff. When Phyllis began receiving crank calls, the elderly but feisty litigant was not the least intimidated, recounting how, after receiving one death threat, she responded, "Well, tell me more."

The Foundation offered into evidence the religious/commercial purposes behind the campaign by the Fraternal Order of Eagles, which had donated the La Crosse monument, to erect bible edicts in public buildings and parks nationwide. In the 1950s, Judge E.J. Ruegemer had launched the Eagles' project in conjunction with director Cecil B. DeMille's release of his movie "The Ten Commandments." After the 1986 trial, the case was dismissed on a technicality, not on the merits. In a moral victory, the La Crosse daily newspaper, which had actively editorialized against the complaint, changed its mind at the time of the federal trial and agreed that the monument should be moved to private property. The Freedom From Religion Foundation's annual college essay competition has been named in honor of the late Phyllis Grams, a longtime member of the Foundation.

"I remember one reporter quoting the La Crosse attorney as saying it was a trivial thing anyway, and I told them that was almost heresy, to intimate that any violation of the First Amendment was trivial."