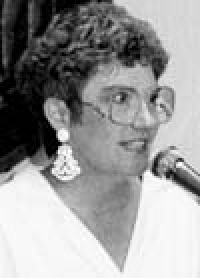 Attorney Valerie White was responsible for ending a 30-year Establishment Clause abuse, in which a lighted cross was placed on top of a Christmas tree on the courthouse lawn in Hyde Park, Vermont. Ms. White and a friend circulated a petition against the Christian symbol on public property in 1985. Over the next two years, the Vermont ACLU wrote county officials, who refused to take down the cross. On December 14, 1987, a magistrate ruled that the cross was unconstitutional. The following year, officials signed a stipulation that bound them and their successors not to erect the cross again.

"Their lawyer said, '. . . This is really a small matter.' The judge drew himself up and said, 'Counselor, this is not a small matter. This is a question of constitutional law.' "