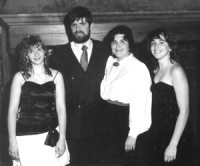 During Merith Weisman's 1986 graduation ceremony in a public high school in Rhode Island, a Baptist minister instructed everybody to bow their heads in prayer and "thank Jesus Christ." Daniel Weisman, Merith's father and a professor of social work, sent a note of complaint to the principal, but received no reply. In 1989, as his daughter Deborah Weisman's graduation approached, Daniel reminded the school about the Establishment Clause problem. He was informed that the school had arranged for a rabbi to give a message at the ceremony, ignorantly thinking this would satisfy the state/church complaint of a Jewish family. In 1991, the case reached the U.S. Supreme Court, which ruled in favor of the Weisman family. In affirming nearly four decades of precedent against school prayers, the high court ruled that prayers at public school graduations are an impermissible establishment of religion.

Daniel Weisman: "People shouldn't be able to live with themselves if they leave these violations unchallenged."