Floyd Olson, Mary and Alan Porath, and Esther Mattson were plaintiffs in the Freedom From Religion Foundation's lawsuit against Ozaukee County, Wisconsin, to enforce a federal court ruling against government observance of religion. The county continued to observe Good Friday as a state holiday and religious observance, despite a victorious lawsuit by the Freedom From Religion Foundation in 1996 ruling "Good Friday" as a state holiday unconstitutional. The Foundation has been named plaintiff in all but one of the lawsuits it has undertaken, but only rarely can it be the sole plaintiff. Standing requirements for plaintiffs mean that the law being challenged must affect some plaintiffs adversely and personally, hence there was a need for Ozaukee County plaintiffs. Foundation members Floyd Olson, Esther Mattson, and the Poraths graciously volunteered to become plaintiffs. After the lawsuit was filed, Ozaukee County supervisors voted 18-12 in March 1997 to abandon their Good Friday holy day; a "floating holiday" will take its place instead. 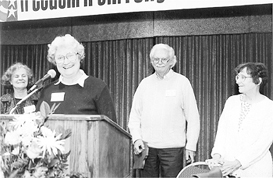