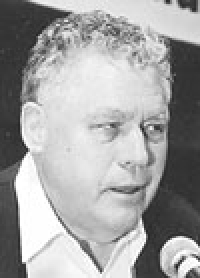 Clarence Reinders volunteered to be plaintiff in the Freedom From Religion Foundation's lawsuit over the presence of a Jesus shrine dominating a public wayside in Marshfield, Wisconsin. The 15-foot-high marble statue of Jesus was adopt a large sphere on a base bearing the inscription, "Christ Guide Us On Our Way." The shrine had been donated to the city by the Knights of Columbus in 1959, and had elicited numerous complaints to the Foundation by passing motorists. After the lawsuit was filed, the city placed a disclaimer sign, stating that it did not endorse any particular religion, then quickly sold part of the public park to the Praschak Memorial Fund in a "sweetheart" deal to "save the shrine."

The Foundation pursued its lawsuit against the city, also naming the memorial fund as defendants, because the shrine still appeared to be part of a public park. Judge Shabaz ruled in the city's favor, and the Foundation appealed the case to the 7th Circuit Court of Appeals in Chicago. The Court ruled 3-0 in the Foundation's favor in May 2000, ordering that a prominent disclaimer and fence be erected making it clear the shrine was not part of a city park.