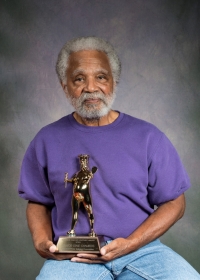 Senator Ernie Chambers, the longest serving state senator in Nebraska, will receive the Emperor Has No Clothes Award. He challenged his legislature's payment to ministers to open sessions in Marsh v. Chambers (1983), a case that went before the U.S. Supreme Court. Chambers graduated from Creighton University, never took the bar, and was first elected in 1970. He was term limited out in 2008, and won re-election in 2012. He received FFRF's Hero of the First Amendment Award in 2005. Known as "defender of the downtrodden," he's impressively ensured that Nebraska was the only state never to adopt a religious exemption for child neglect, due to his diligence. This spring, he persuaded the state to drop the death penalty after seeking its abolition since 1970.

I dare you to find anyone who embodies the spirit of the child in the Hans Christian Andersen fairy tale who tells it like it is better than Ernie Chambers.

Senator Ernie Chambers is the longest-serving state senator in Nebraska, where he's known as a "defender of the downtrodden," and a man of the people. As Rita Swan mentioned in her speech, Senator Ernie Chambers impressively ensured that Nebraska was the only state never to adopt a religious exemption for child neglect.

Ernie previously won a First Amendment Hero award from FFRF in recognition of his career as a firebrand, and in particular his challenge as a public official of paid legislative prayer. Marsh v. Chambers went before the U.S. Supreme Court in 1983 and it got it wrong, but Ernie had a moral triumph by persuading his unicameral branch to drop the payment for legislative chaplains anyway.

Then you may remember that a few years ago Ernie sued God. This was a brilliant piece of writing and logic. Claims for relief included:

"That the defendant has made and continues to make terroristic threats of grave harm to innumerable persons. . .

"Causing calamitous catastrophes resulting in widespread death, destruction and terrorization of millions upon millions of the Earth's inhabitants including innocent babies, infants, children, the aged and infirm without mercy or distinction."
Ernie, the plaintiff, noted in the legal complaint that despite reasonable efforts to effectuate personal service upon defendant ("come out, come out wherever you are") plaintiff has been unable to do so.

Ernie Chambers graduated from Creighton University Law School, and was first elected in 1970.
He was term limited out in 2008. The law was changed just to get him out, but he waited it out and won re-election in 2012.

This spring, notably, he persuaded the state to drop the death penalty after never giving up, seeking its abolition since 1970. Yes, there's pushback in Nebraska, but we were so thrilled with Ernie Chambers' victory over Old Testament "eye for eye, life for life" barbarity that we asked him to please come and accept our Emperor Has No Clothes Award.
We're honored that he's agreed to be here today.

This honoree teaches all of us the importance of being Ernie.

I'm from a small town in Nebraska called Omaha and I have small-town ways. But I do not have a small brain or a small mind. Small minds think little thoughts, and you do not have to be limited in terms of your mental activities by the size of the backwardness of the place where you spend your life laboring.

I was reared in a deeply religious fundamentalist household. The church was called the Church of God and Christ and the people claimed to believe every word in the bible the way it was written, but that was not what they believed at all. They had indicated that the only people who were right were in that church. And they did not mean the entire denomination. They meant just the people in that little building.

I pay a lot of attention to words and language. Words have a life of their own, words have meaning, words have power. I believe in precision in the use of words, even though the ones reading them don't read as carefully as I will write them. I'm just saying that as we go through life we have to establish priorities and we determine which things mean the most to us. And to many people, words don't mean anything.

When people criticize me, it has as much impact on me as the sweat of a gnat would have on the Rock of Gibraltar. People are fickle. If they're in a good mood, they say nice things. If they are in a bad mood, they say mean things. Why should I get angry if people are the way people are? If they say something today and say the opposite tomorrow, am I surprised? No. Why should I be surprised and upset when something behaves the way I know it's going to behave?

You know why I will not accept the term atheist? I've never referred to myself as an atheist and when other people hang that label on me, I tell them there are only two labels I accept: my name, which my mother gave me, and black. Black is a term that carries with it connotations: the lynchings, the bombings, the burnings, the castrations, the raping of our women and our little girls.

But as black people we are so accustomed to being defined and labeled by other people that I don't accept their labels. I don't need to. And you ought to think about it. There is so much arrogance among white people and white people are not even aware of it a lot of times.

You're going to define yourself with a negative definition. Not of what you are, but of which you are not.

And I am supposed to accept what somebody says I am? If you allow yourself to be defined and labeled, then you have lost already. You don't have to accept what I say. What I say is based on what I've come to believe and what helps me make it through a very cruel hostile world. But unlike a lot of people who accept those labels and flaunt them and are proud of them, labels don't play any part in my life.

I've read the bible. I call it the bibble. And, as I told the people with whom I was eating, that's the way I pronounce the word. And one of the senators who was there, he was pretending to be religious. He said he was offended by the way I mispronounce the word. I asked why. He said because that's not the way you pronounce it.

I asked him how you pronounce it and he said "bible" and I said "bibble." You say to-may-to, I say to-mah-to. Makes no difference. I said, however, when you read that book, you don't pay attention to what it says. You want to go back to Genesis and say God said whoever sheds blood by man shall his blood be shed? I asked if God meant what he said? Yes. Well, how do you know what God says? It's in the bible. And you say whatever is in the bibble is what God said, huh?

I'm not mad at you because you mispronounce it "bible" and you are going to be mad at me because I pronounce it "bibble." It's what it is to each of us and however way we pronounce it does not change it at all. But if you believe that it does, then it shows that the world for you is what's in your head, not what's out there. So you see things as you are not as they are. And because of that you misunderstand a lot.

I will not label nor let anybody label me, and yet people do it anyway. So if they want to say I'm an atheist and they are cultured, then I quote Shakespeare: "As You Like It." If they're rough and tumble, work hard for a living and buy fast food, then I tell them I'll give you what Burger King would say: "Have it your way." Your saying it doesn't make it so, but if it makes you happy, then as you think in your heart, let it be unto you. But it means nothing to me.