Charles Strouse, composer of the Broadway musicals “Annie,” “Applause,” and “Bye Bye Birdie” and many other musicals and songs, spoke and entertained with song at the piano Oct. 8 at FFRF’s 34th national convention in Hartford, Conn., where he received an Emperor Has No Clothes Award.

The award, a golden statutette, is reserved for public figures who make known their dissent from religion. Strouse, a forthright atheist, notes his views in his memoir, “Put on a Happy Face.” He recounted such experiences as serving as chauffeur and accompanist for actress Butterfly McQueen (a Lifetime FFRF member). 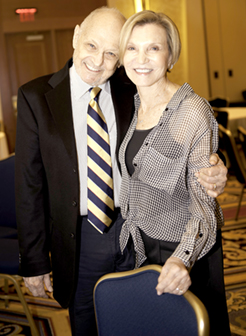 I’m overwhelmed, I truly mean this. My beliefs were something I always kept to myself for no particular reason. And I never knew there was a group of people that were in a formal way not only agreeing with me, but doing something about it. I’ve never been an activist of any sort, and I’m very proud that you all share my view. I don’t know what else to say except what I’ve done is prepare a couple of songs that I’d like to do for you tonight.

I never thought that atheists made speeches, and I’m certainly surprised to have been asked to. I became an atheist when my sister died at age 40. She had been an orphan and had been adopted by my parents and had fought hard for an identity, married, had four children and five surgical procedures for cancer, but died for all her suffering. When a rabbi said to us, “God in his mysterious wisdom has chosen to take this girl,” that kind of clinched it for me, but I was headed that way for a long time.

I had tested God in my childhood prayers; he never took it out on me, on the contrary. Later I had, with the assistance of my wife, four children — three of whom are crazy about me and one who isn’t, though I like to think he’s just angry with himself.

I am a composer. I never got to serve in the armed forces, but was made quite aware then that there are no atheists in foxholes, a very powerful statement to me at the time. Years later, it occurred to me that if everyone was an atheist, there mightn’t be any foxholes.

Two weeks ago I broke my wrist in a fall. For the first time, it seemed just vaguely possible that perhaps god (although I knew there was no god) was trying to tell me not to make a speech before the atheist society. On the remote possibility that this was so and there was a god, and that it is curiously Yom Kippur tonight, a religious day of atonement, I thought I should, you know, just in case to make absolutely sure there was no god, come up here and make this speech and see if I would be struck down. So broken wrist and all, I’m going to struggle with this and play a few songs.

To be perfectly honest, I didn’t know such a society existed, I thought it was just a very private thing that I believed in. I mean, half of the people who were mentioned [in Dan Barker’s introduction], people in my profession who were atheists, I had no idea.

I met Irving Berlin once, Richard Rodgers once, obviously nonbelief was never spoken about. It’s nice to know there is such wonderful company here. Anyway, I’ll just do it in my first show on Broadway, which people account as the beginning of life, like Adam and Eve Broadway — “Bye Bye Birdie.” 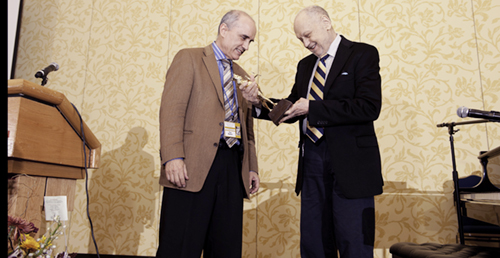 And then there was a song, generally acknowledged to be one of the worst songs ever written in the great American song book, but then became very popular because of a certain young woman.

I did a show [in 1962] called “All American,” starring one of the great musical performers of our day, Ray Bolger. But frankly, we didn’t want him for the role. We wanted a European actor because the part was a Russian professor who comes and falls in love with America. It was directed by Josh Logan, Lee Adams and Mel Brooks. Logan wanted Ray to do it and signed him. He decided to do the part in his version of a Russian accent, and I knew we were in trouble when Brooks turned to me one day in rehearsal and asked, “Why is Ray speaking Japanese?” That was a sign of what was going to happen in this show, which indeed did. But there was one song which was a great favorite of Lee’s and mine and Mel’s. 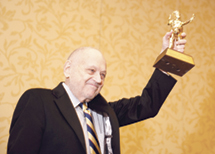 You notice the left hand is not doing too much, but you’re very kind. I used to have a great problem. I don’t know why I’m saying all this to you, you’re all atheists. This has nothing to do with anything, these are just things that happened to me in my life. And since you’ve been kind enough to give me an award and all, I might as well make you share them.

I used to lack confidence. I still do in a way. We all have doubts about ourselves. One of the people who gave me a great deal of confidence was Lauren Bacall, who was the lead in my show “Applause.” She had balls, she was really something. “Applause” opened to bad reviews in Baltimore [but went on to win the 1970 Tony Award for Best Musical, with Bacall winning the Tony for Best Actress in a Musical].

We were scared out of our wits on opening night. There was an interview scheduled in Bacall’s hotel suite with the theater critic from Look magazine, which at the time had the largest circulation in America. We were all very jittery in her suite. Lee and I were treating him as if we were servants: “Would you like a Coke?” “Sit here, it’s a little more comfortable.” Betty Comden and Adolph Green [who wrote the play’s book] were being very slavish to him.

Bacall came in and cameras materialized, with a lot of flash bulbs popping. Louis Botto was the critic’s name. “Well, what did you think of the show?” Bacall asked. “I thought it was very interesting.” Botto said. Bacall replied, “Go fuck yourself.”

At which point, it was like being on a sinking ship that righted itself. He was being so sweet to us, anyway.

I was going to play a song from “Applause,” I’ll play it. I forget what key I’m in.

That was a mistake to sing that because it was in the wrong key and I hurt my hand again. “Golden Boy” was another show, but I’m not going to do it because it’s too much on my hand. “Golden Boy” was a big hit and opened three days before “Fiddler on the Roof,” so we did not get the Tony for that, but it was a wonderful show.

We were always sold out because Sammy Davis was black and Jewish, and so we were never without people to fill the seats. As a matter of fact, the show had a lot of book problems. Clifford Odets, with whom Lee and I wrote the show, died the first day of rehearsal. The book was then finished by a playwright by the name of William Gibson, and as I say, we were always sold out, but the first act never matched the second act. There was a first act by Bill, a second act by Clifford and it was very painful to watch. But people kept coming to the show because of Sammy; he was the Everyman.

I feel so many friends here, even though I never knew you existed. There was another show I wrote, “Mayor,” which my wife Barbara, who is here with me tonight, choreographed. [“Mayor” depicted a day in the life of New York City Mayor Ed Koch.] In it was a song that I always liked. Many of you here, I’ve been told, are from all over the place, but many of you come and visit New York, and there is, you may have noticed, a way that we have of speaking that is different. And so, if for instance you are here for just a visit. . .

[Plays and sings “You Can Be a New Yorker Too!”]

[Plays and sings “I Don’t Need Anything But You” and “Tomorrow.”]