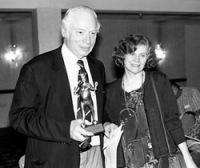 Prof. Steven Weinberg, the first official recipient of the Freedom From Religion Foundation's Emperor Has No Clothes Award, accepted the award in person on November 1999, at the Foundation's annual convention in San Antonio, Texas.

Weinberg was awarded the premiere "Emperor Has No Clothes Award" after making an especially significant, widely reprinted remark about religion at a science conference in April 1999 in Washington D.C. He said:

Steven Weinberg, a professor in the physics and astronomy departments at the University of Texas at Austin, is director of the Theory Group of the physics department there, which he founded.

Weinberg won the Nobel Prize in Physics in 1979 for uniting the electrical and the weak nuclear forces into a single force called the electro-weak force, an award he shared with Sheldon Glashow and Abdus Salam. This was one of the most significant advances in the second half of the 20th century. In 1991 he won the National Medal of Science.

Weinberg's books include: The First Three Minutes, Gravitation and Cosmology, The Discovery of Subatomic Particles and Dreams of a Final Theory, which has a chapter called "What About God?" He also wrote The Quantum Theory of Fields and over 250 articles on elementary particle physics, cosmology and other subjects.