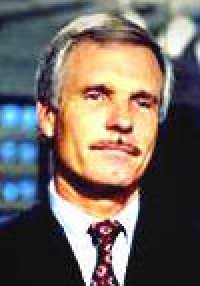 Ted Turner, founder of Cable News Network, "tells it like it is" about religion and is regularly called on the Christian carpet for his candor. The TV mogul, who is also a notable philanthropist who pledged $1 billion to the United Nations in 1997, has described Christianity as "a religion for losers." He publicly chastised Pope John Paul, welcoming him to the "20th century" in 1999, and calling the Ten Commandments "a little out of date."

According to the New York Post (March 8, 2001), Turner mentioned his shock at seeing several CNN Washington newsroom employees with ashy crosses on their faces on Ash Wednesday: "Shouldn't you guys be working for Fox?" he asked them.