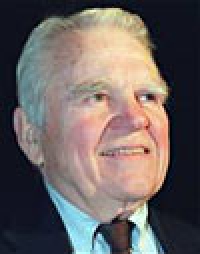 CBS commentator Andy Rooney has frequently made irreverent comments in his "60 Minutes" commentaries, columns and books. In November 2000, he reminded readers: "The obituaries in the newspapers and on television [of Steve Allen] were well done but none mentioned what ended up being an obsession with Steve. He was a student of the Bible and a dedicated atheist intent on proving the Bible was a seriously flawed book that many people who profess to live by it, don't know or understand."

In his 1999 book Sincerely, Andy Rooney, he included a final section called "Faith in Reason." In it he reprints a thorough letter about his agnosticism and freethought views. Sample quotes:

"We all ought to understand we're on our own. Believing in Santa Claus doesn't do kids any harm for a few years but it isn't smart for them to continue waiting all their lives for him to come down the chimney with something wonderful. Santa Claus and God are cousins."

"I just wish this social institution [religion] wasn't based on what appears to me to be a monumental hoax built on an accumulation of customs and myths directed toward proving something that isn't true."

"Christians talk as though goodness was their idea but good behavior doesn't have any religious origin. Our prisons are filled with the devout."

"I'd be more willing to accept religion, even if I didn't believe it, if I thought it made people nicer to each other but I don't think it does."