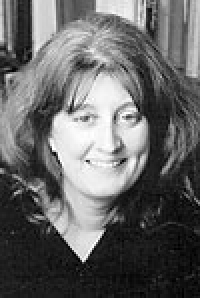 Katha Pollitt, poet, author and columnist of the "Subject to Debate" biweekly column in The Nation, was the second convention recipient of the Freedom From Religion Foundation’s "Emperor Has No Clothes Award."

In 1995, Katha Pollitt was designated the Foundation’s "Freethought Heroine" for her willingness to forthrightly volunteer her atheism, and defend rationalism and the separation of church and state in her column, in interviews and on national TV programs. Katha even wrote up the 1995 convention, in a column called "No God, No Master," one of the collected essays in her book Subject to Debate (2001).

We rely on Katha Pollitt for such columns as "Catholic Bashing?", "Heaven Can Wait," "Get Thee Behind Me, Disney," "Vouching Toward Bethlehem," and "Of Toes & Men," in which she wrote: "You’d think by now politicians would realize that promoting family values is like wearing a Kick Me sign on your back." Katha Pollitt’s piece de resistance was her column titled "Freedom From Religion, Si! " appearing in 2000 about Lieberman, et. al.

She analyzed: "What religion you may be is your own business--but it’s society’s business that you have one." Her wonderful columns, her outspoken, official dissent from the "official American civic religion," are why we consider her like the wise child who finally "told it like it is" in the Hans Christian Andersen fable, by saying: "The emperor has no clothes."