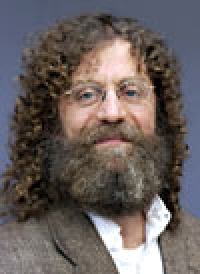 Nobel laureate Steven Weinberg, the first “Emperor” awardee, says that although few of his scientific colleagues believe in a god, they keep their atheistic/agnostic views to themselves. But not scientist and author Robert Sapolsky — he is not shy about identifying himself as an atheist, as evidenced by his books.

When the Foundation issued a statement about 9/11, calling it a “faith-based initiative,“ Sapolsky wrote to us: “You guys are great — wonderful statement. I just posted it in my lab’s hallway.” When he was invited to the convention, he wrote: “Sure — get the local Holiday Inn to put up a sign, ’Welcome hell-bound atheists.’ ”

Robert Sapolsky is a professor of neurology at Stanford University. He received an A.B. in biological anthropology from Harvard (Phi Beta Kappa) in 1978 and his Ph.D. in neuroendocrinology from Rockefeller University in 1984. He did postdoctoral work at the Salk Institute and was a research associate at the Institute of Primate Research, National Museums of Kenya (1985). He is a MacArthur Fellow (1987) and has won many awards for teaching, science investigation and writing. His books include the best-selling A Primate’s Memoir (2001), The Trouble with Testosterone and Other Essays on the Biology of the Human Predicament (1998) and Why Zebras Don’t Get Ulcers (1994).