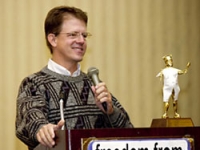 Steve and his wife Mary Ann Benson, in a highly publicized action, left the Mormon Church in 1994, when his grandfather, Ezra Taft Benson, was still the Mormon president. Since then, Steve has become an outspoken freethinker. He has teamed up with Foundation musician Dan Barker to present a freethought look at religion in the news in their unique music and cartoon comedy revue, "Tunes 'n 'Toons."