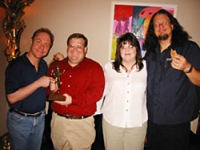 Penn & Teller, magicians and entertainers in Las Vegas, were presented with the Emperor Has No Clothes Award by Nevada freethinkers Jennifer and Clark Adams, on behalf of the Freedom From Religion Foundation. Several Foundation members, pleased with Penn and Teller's skeptical slant and remarks, and their Showtime show “Bullshit!”, nominated the pair, including Clark Adams, a Life Member of the Foundation. Both Penn and Teller are outspoken atheists and skeptics, admirers of James (The Amazing) Randi and Richard Dawkins.