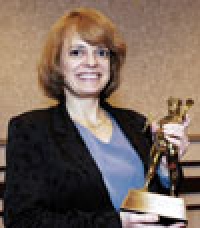 Natalie Angier is an author and Pulitzer Prize-winning science writer for The New York Times. She graduated with honors from Barnard College in 1978. She was a founding staff member of the science magazine Discover. She has been the senior science writer for Time magazine, an editor for Savvy and a professor at the New York University's graduate program in Science and Environmental Reporting.

Her books include: Natural Obsessions, an inside look at the world of cancer research (1988), The Beauty of the Beastly, a "hymn to the creatures we'd rather forget" (1995), and Woman: An Intimate Geography (1999), a New York Times best-seller translated into 19 languages. She edited The Best American Science and Nature Writing 2002. Her writing has appeared in many magazines, publications and anthologies. She is married to Rick Weiss, a former science reporter for the Washington Post. They have one daughter.

"Confessions of a Lonely Atheist" by Angier appeared in The New York Times Sunday Magazine on Jan. 14, 2001, in which she "outed" herself as an atheist.