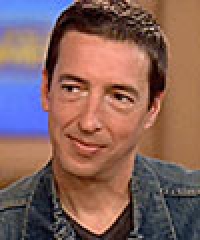 Ron Reagan, the son of former President Ronald Wilson Reagan, was given an Emperor Has No Clothes Award after saying at his father's June 2004 funeral:

"Dad . . . never made the fatal mistake of so many politicians--wearing his faith on his sleeve to gain political advantage."

Then came the Larry King Live interview on CNN on June 23. When Larry King pressed Reagan about whether he had thought of running for public office, Ron replied:

"I'm an atheist. So there you go right there. I can't be elected to anything because polls all say that people won't elect an atheist."

Reagan also said: "When you hear somebody justifying a war by citing the Almighty, I get a little worried, frankly."

That was followed by similar remarks about his atheism to The New York Times Magazine.

Reagan also addressed the religious opponents of embryonic stem cell research in a noteworthy address before the National Democratic Convention on July 27,2004:

"Their belief is just that, an article of faith, and they are entitled to it. But it does not follow that the theology of a few should be allowed to forestall the health and well-being of the many."

Although Reagan unfortunately was not free to accept his award in person, he graciously phoned to accept the award. A personalized statuette was mailed to him.