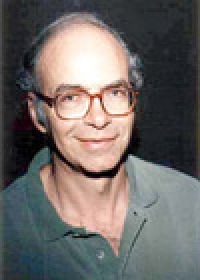 This award was accepted in person in Madison, Wis., on Oct. 30, 2004, at the 27th annual national convention of the Freedom From Religion Foundation.

As the DeCamp professor of Bioethics at the University Center for Human Values, Princeton University, Prof. Singer is a well-known nontheist as well as writer and ethicist.

We were inspired to invite him after seeing his thoughtful and forthright interview on the Bill Moyer Show, in which he talked about his latest book, The President of Good and Evil.

As he has recently told the Nation, he does not see (nor does FFRF see) this as a political book. Singer analyzes the ethics behind Bush’s constant statements about right or wrong, good or evil, his arguments against stem cell research, in favor of the war, funding of religion, and so on.

Singer focuses on Bush’s religious absolutism, and calls it not only unethical but dangerous.

In 1977, he was appointed to a chair of philosophy at Monash University in Melbourne, and subsequently was the founding Director of that university’s Centre for Human Bioethics. He was a Fulbright scholar in 1978.

Singer was the founding president of the International Association of Bioethics, and with Helga Kuhse, founding co-editor of the journal Bioethics.

In 1999 Prof. Singer was offered his position at Princeton.

He first became well-known internationally after the publication of Animal Liberation in 1975. His many other books include: Democracy and Disobedience; Practical Ethics; The Expanding Circle; Marx; Hegel; The Reproduction Revolution (with Deane Wells), Should the Baby Live? (with Helga Kuhse), How Are We to Live?, Rethinking Life and Death; One World; Pushing Time Away, and A Darwinian Left: Politics, Evolution, and Cooperation.

His works have appeared in twenty languages. He is the author of the major article on ethics in the current edition of the Encyclopedia Britannica, and has written hundreds of scholarly and popular articles.

If anybody fits the definition of being like the child in the Hans Christian Andersen fairy tale who fearlessly tells the Emperor he has No Clothes, it is Peter Singer.