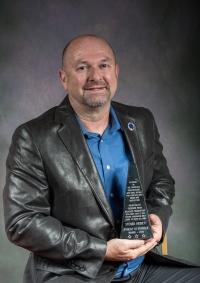 Steven Hewett will be honored with FFRF's Atheist in Foxhole Award. The former police officer and Afghanistan war veteran returned home with a Combat Action Badge and Bronze Star, only to find a Christian flag flying at the Veterans Memorial in King, N.C. In December, following a long court battle taken on his behalf by Americans United, the city agreed to stop flying the Christian flag and to remove a cross from a kneeling soldier statue. Steven is a Lifetime FFRF Member.

He was introduced by Steve Trunk, a previous winner of FFRF's Atheist in Foxhole award:

Steven Hewett grew up all over the country because his dad was in the Air Force, as was mine. He's a former Christian who saw the light and became an atheist. Steve retired in 2005 from the Department of Defense. He served in the U.S. Army from 1975 to 1978 and then he continued his military service with the North Carolina National Guard from 1995 to 2005, ultimately reaching the rank of staff sergeant. He was activated and deployed to Afghanistan. While deployed there, Staff Sergeant Hewett earned a Bronze Star, a Combat Action Badge and several other medals. When he came back home, he found a Christian flag flying at the Veterans Memorial in King, N.C. After a long court battle, the city agreed to stop flying the flag and remove a cross from a kneeling soldier statue. He's married to Jackie Holland, who is a retired Stokes County schoolteacher. Steven is currently an activist for FFRF and working on a book about his lawsuit.

I'm honored to be standing up here. I want to let you know that this endeavor that I started was for veterans and about veterans, because we honor service and sacrifice. We honor the veterans who come back from war. We honor veterans who come back from war who have been killed in action with the American flag. And that's the only flag that you'll ever see on the uniform of a soldier.

It all started in 2010, when I noticed a Christian flag and a kneeling soldier statue at our memorial in King, N.C., as well as religious services on Memorial and Veterans days. And those were endorsed by the city. So I decided to call the city manager to complain. During our conversation he told me, "You will answer to God and Jesus Christ for this, upon your death, for complaining about it." He then abruptly hung up. I abruptly called him back. I recorded that conversation from that point on, which was used in the lawsuit.
The ADF, or American Defense Fund, had been secretly discussing how to get the Christian flag back up. And so for about three months, this group decided to protest at the memorial. The city gave them permission to protest 24/7. They camped out there; they held it hostage. So they held vigil for three months, keeping the Christian flag on the memorial. There were also other local protests. There was this tractor-trailer rig that was just down the street from where I lived. You can see they spent quite a bit of money on it, with a sign that said, "Freedom of religion — freedom of speech. This is America." This was put up by the Stokes County militia. They also put up thousands of yard signs all over town. Any time the City Council was talking about the memorial, they were surrounding the city with prayer chains and Christian flags.

Calvary Baptist Church rallied 5,000 of its Christian soldiers to march in October of 2010. This is still during the three-month period the flag was down. So this was a march that ended at the memorial. Five thousand people were there waving Christian flags.

But it didn't end there. Two days later I was assaulted by a neighbor who is a Christian fanatic, who had Christian flags flying at his house. He was a self-proclaimed preacher. I had to get a restraining order against him. And then I had to take other measures. Some of the other examples of the hate speech and threats were on the Internet. One gentleman in town says, "Why is this man still alive?" Another wrote, "No one speak to him, avoid doing business with him. Refuse any contact, overlook him by the staff at restaurants, make his life as miserable as possible, even up to the edge of breaking the law."

Unbeknown to these people, I retired from the Department of Defense. I have a monthly income that you can't mess with unless you shut the government down. My house is paid for. I am completely debt free. You cannot run me out of town financially. But they did go after my wife. They tried to get her fired from her job. A student saying the Pledge of Allegiance over the loudspeaker said, "I pledge allegiance to the Christian flag. Oh, excuse me, I'm sorry, I mean the American flag." And so she had many friends at school that she lost within a matter of days.

I took security measures. I have a "No Trespassing" sign, I put security cameras on my house. I also put security cameras in my vehicle where I had 360-degree coverage. I was followed quite often anytime I was driving in town, but it was fun watching people follow me. I used to be a police officer, so I know if you make three left turns and the car is still behind you, guess what? You're being followed. They even followed me into the parking lot, parked next to my vehicle. So I have all that on video. It's rather entertaining.

[Hewett then showed a news clip of reporter Craig Thomas from WXII Channel 12: "This controversy has gone on for about six months, and this is what we now know: This Christian flag will go up to that flagpole as soon as the calendar turns to January. One hundred ten ping pong balls, each representing one flag-flying application, put into a hopper. Of the 59 applicants in the drawing, all were there for the Christian flag or Christian cross flag, except for five — those of Steven Hewett for his family that served, and for his wife's father. Selected for the 46th week of the year, on November 12, Hewett will fly the Buddhist flag to honor his own service."]

Anyway, they got the flag back up. The American Defense Fund made a sham public forum policy that one flagpole was to be designated for public speech, but it was limited speech. It was limited to only a symbol that was recognized by Arlington National Cemetery. And it could be on a flag. But you can also have colors on the flag, so they could have the Christian flag in their ultimate glory of the white, blue and red. And I did have five Buddhist flags because I had some Buddhist beliefs. Plus, it pissed them the hell off.

Yet on the day that I flew my flag, the Stokes County militia was there protesting us, flying their little Christian flag to make sure it was at the memorial. Also, on another day in the first year, a supporter flew no flag. They were threatened with having their arms broken, and somebody put little crosses in the box where we have the name of who the flag was flying for. The police were called and they said there was nothing they could do. So our good ol' city police department didn't do anything.

So, for almost four years the Christian flag dominated the memorial. For the first two years it was 47 weeks with a flag and then five weeks of no flag. The second year was 47 weeks with the Christian flag, four weeks with no flag or my Buddhist flag. Then the other two years, while the lawsuit was in progress, another 47 weeks and five weeks. Those five weeks were all mine. And you could hear them groan every time my name was called for a week that I was going to fly the flag. Finally, in November 2012, Americans United for Separation of Church and State filed a lawsuit on my behalf.

The elements of the lawsuit were this: The Christian flag was flying on a public memorial on public property. The Christian soldier cross that was placed there by the city was paid for by the city. And also the city sponsored Christian services at all the Memorial and Veterans day events. Not only that, but Calvary Baptist Church always had their religious material at the police department. And the police department had a Facebook page that had several religious verses on it.

So FFRF got involved in that because of the religious verses. FFRF advised the city that it was a violation of the Establishment Clause. The city said, "Stick it up your ass." The city attorney's advice was that the religious quotes would stay. A few months later, the city had a media policy. And it prohibited the chief from doing this. So that came down.

But the lawsuit over the flag proceeded. For over two years there were multiple depositions, fact-findings, motions, countermotions, several mandatory negotiation meetings, all in an attempt to avoid a trial. Then in November 2014, two years after the lawsuit had begun, Federal Senior District Judge James Beaty called for all parties to assemble and to try to negotiate a settlement.

During the settlement time he asked each party questions. First he asked Greg Lipper of Americans United, "Why should we take the flag down? Why should we do this?" And then the judge looked over to the other side table and started asking them. And then I went, "Oh, hell yes." He was asking why a Christian flag should be up there. Why, why, why? And the city was just stumbling for an answer.

And so at that time I knew we had won. The judge, to avoid a trial, sent us off to a room where we then started hammering out a negotiation. The city capitulated to all our terms. The City Council agreed to remove the kneeling soldier in front of the Christian cross. It agreed to not fly the Christian flag at the Veterans Memorial. And in a previous ruling, the judge had told them they could no longer promote or endorse Christian services.

The city of King spent $50,000 of taxpayer money on this lawsuit. The insurance company paid Americans United half a million dollars in attorney fees and gave me a dollar.

So we now honor all veterans at the memorial. It has been restored. We have a silhouette with a soldier kneeling before the helmet and rifle. This is inclusive of all veterans. This is a standard battlefield memorial. And the flagpole on the far left has been left empty. I guess that's so they can imagine the Christian flag being there, since I had to imagine that it wasn't there. But there's also a plaque at the memorial.

And that plaque is something that really got me, because it is to all American veterans. At the bottom it says, "To American Veterans for every symbol of heroism, sacrifice and loyalty and freedom."

And yes there are atheists in foxholes, because I am one.