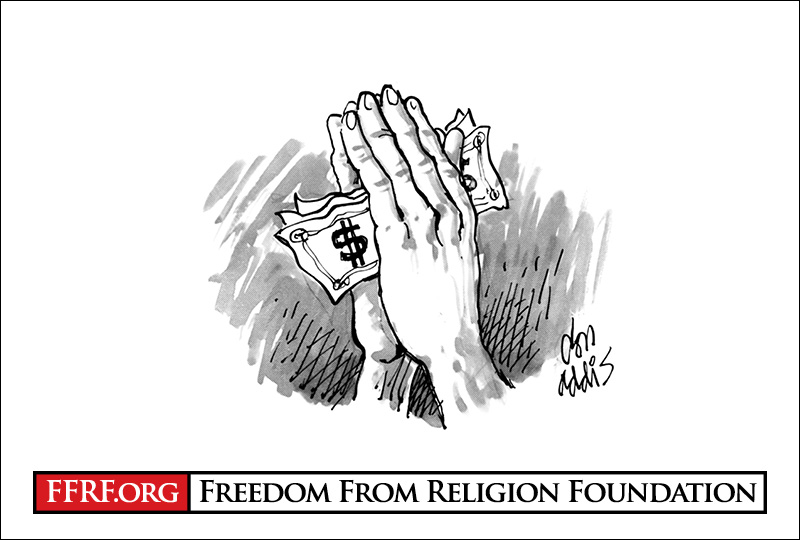 The Freedom From Religion Foundation, joined by 30 secular and religious groups, has sent a letter to members of Congress and the White House today urging a boycott of the National Prayer Breakfast.

The event, held annually in the first week of February in Washington, D.C., is framed as a large bipartisan forum for political, social and business leaders to gather and pray together, but in reality is a nexus of Christian nationalist organizing.

“A coalition of religious and secular groups is calling on President Joe Biden and Congress to end their involvement with the National Prayer Breakfast, a private event used by its secretive sponsor to foster right-wing networking around the globe,” reports The Young Turks news portal, prominently citing the Freedom From Religion Foundation’s role in the effort.

The letter starts out, “On behalf of 30 religious, secular, and activist organizations and 10 religious and secular community leaders, and elected officials we are strongly encouraging you not to sponsor or attend the National Prayer Breakfast.”

In an informational sheet on the National Prayer Breakfast, FFRF lists the myriad ways in which the event is problematic. This includes:

FFRF is hoping to make this a reality in conjunction with a host of other organizations. The groups signing on to its letter range from the American Atheists and the American Humanist Association to the Auburn Theological Seminary and God Can Ministries UCC.

“We are so honored to stand with so many organizations, community leaders and elected officials who are taking a stand against the Prayer Breakfast and are exclaiming loudly and clearly to members of Congress, the president and the vice president, ‘No More!’” says Annie Laurie Gaylor, co-president and co-founder of FFRF. “It is bewildering that champions of the separation of state and church such as Sens. Chris Coons and Kirsten Gillibrand would want to be associated with an event that has as its sponsoring organization a foundation with a proven track record of religious extremism, infiltration by Russian agents and bigotry.”

The Freedom From Religion Foundation is a national nonprofit organization with more than 39,000 members across the country. Our purposes are to protect the constitutional principle of separation between state and church, and to educate the public on matters relating to nontheism.