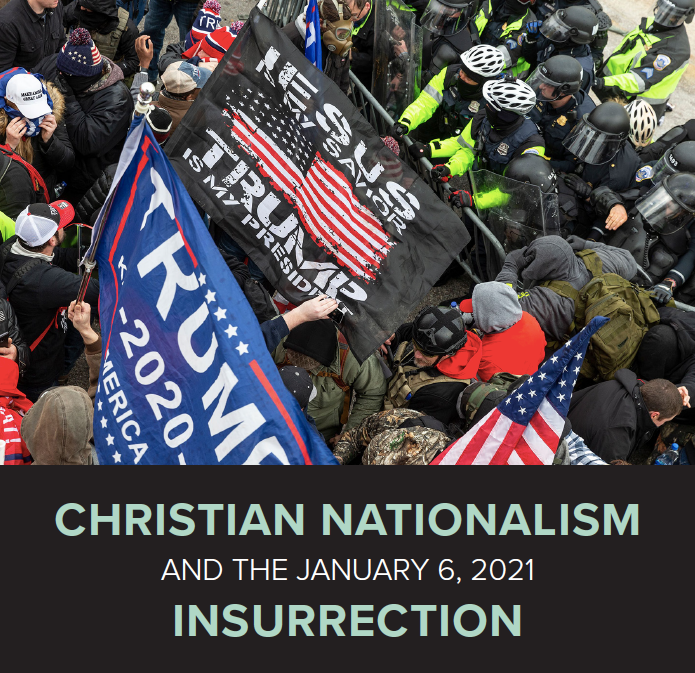 The Freedom From Religion Foundation regrets that the recently released Jan. 6 House select committee report fails to pinpoint the Christian nationalist motivations behind the Capitol attack.

The committee’s official findings do not adequately illustrate the true nature of the insurrection and its participants, asserts the national state/church watchdog. The rioters, white supremacist Nick Fuentes primary among them, frequently engaged in Christian rituals before and during the assault. The “Jericho Marches,” in which rioters walked around the Capitol in the days prior praying for the results of the election to be overturned and calling for “spiritual warfare,” the chanting of “Christ is king,” banners containing biblical messages and crosses carried by the insurrectionists show strong evidence of Christian nationalism. More prayers at the “Save America” rally organized by Trump before the putsch, prayers and even exorcisms inside the Capitol during the insurrection, as well as the strong Christian nationalist ties by public officials associated with the “Stop the Steal” movement likewise demonstrate its pervasiveness.

Unfortunately, the report only discusses Christianity twice, and Christian nationalism just once. The report touches on how co-founders of the Jericho Marches were quick to latch onto then-President Trump’s Twitter account to motivate their Christian followers. It also details Fuentes’ supporters, identified as “Gyropers,” engaging in white supremacist inside jokes, memes and puns, accurately identifying them as Christian nationalists.

Rep. Jamie Raskin, D-Md., and Rep. Adam Kinzinger, R-Ill., have both gone on record stating that the attack was motivated by Christian nationalism. In an interview with the Christianity Today podcast, Kinzinger stated: “Had there not been some of these errant prophecies, this idea that God has ordained it to be Trump, I’m not sure January 6 would have happened like it did.”

FFRF lauds the fact that Raskin, as chair of the House Oversight Committee’s Subcommittee on Civil Rights and Civil Liberties, invited Amanda Tyler to testify about Christian nationalism at one of its hearings. Tyler, executive director of Baptist Joint Committee for Religious Liberty and founder of Christians Against Christian Nationalism, stated in her testimony, “Christian nationalism helped fuel the attack on the U.S. Capitol on January 6, uniting disparate actors and infusing their political cause with religious fervor.” Her organization and FFRF issued a blockbuster joint report early this year detailing the extensive role of Christian nationalism in the strike on the Capitol.

The failure of the January 6th committee’s report to link Christian nationalism with the greatest threat to our democracy in recent memory is baffling and greatly disappointing. Ample evidence, including the detailed report by FFRF and BJC, exists to delineate this fully, yet the report fails to illustrate the full picture. Tyler’s testimony and the joint report stated emphatically that Christian nationalism, a political ideology tied to the conviction that only certain Christian believers should be considered true citizens, is not the same thing as Christianity.

In an article by Religious News Service reporter Jack Jenkins, “Despite ample evidence, Christian nationalism absent from Jan. 6 report,” Jenkins quotes the Rev. Nathan Empsall, head of the group Faithful America and signer of a letter by Christian leaders urging the committee to investigate Christian nationalism: “The January 6 committee only giving only passing mention to the pivotal role of Christian nationalism in its final report is a missed opportunity to fully understand what led to violence at the Capitol — and to prevent future political violence.”

“While it’s not surprising in our religion-deferential country that the Christian nationalist underpinnings of the Jan. 6 insurrection were considered too hot to handle by the committee, it’s very disappointing,” says FFRF Co-President Annie Laurie Gaylor. “Only mentioning Christian nationalism once, and not addressing the problem directly opens the door for further violence to come.”

The Freedom From Religion Foundation is a national nonprofit organization with more than 38,000 members across the country. Our purposes are to protect the constitutional principle of separation between state and church, and to educate the public on matters relating to nontheism.