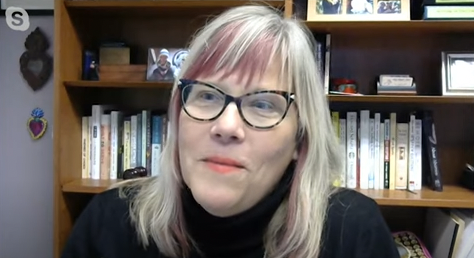 An activist in the forefront of the national battle for reproductive rights is the guest on the Freedom From Religion Foundation’s “Freethought Matters” TV show Sunday.

Amy Hagstrom Miller is founder of Whole Woman’s Health, a series of clinics providing abortion and gynecological services in many parts of the country, and the Whole Woman's Health Alliance, which exists to remove the stigma around providing quality abortion care. She also won the lawsuit Whole Woman’s Health v. Hellerstedt before the U.S. Supreme Court in 2016, in which she successfully challenged abortion regulations that create an undue burden on the patient. And in 2021, Hagstrom Miller was the lead plaintiff in a challenge of the infamous Texas bill SB 8, the first abortion ban tied to a civil bounty law. To acknowledge her steadfast commitment to reproductive rights, FFRF recently gave Hagstrom Miller its Forward Award.

She spoke about the chaos and denial of rights created by the Supreme Court’s Dobbs ruling, as well as religion’s role in banning abortion.

“Many of the women that we care for in our clinics come with a lot of angst that comes from their religion,” she informs “Freethought Matters” co-hosts Dan Barker and Annie Laurie Gaylor. “Instead of it being comforting and supporting to them, they feel very shamed and judged not only for seeking an abortion, but around their sexuality in general. This comes from a very rigid and extreme branch of Christianity that I think does a disservice on many levels to the majority of people who profess to be Christian in this country.”