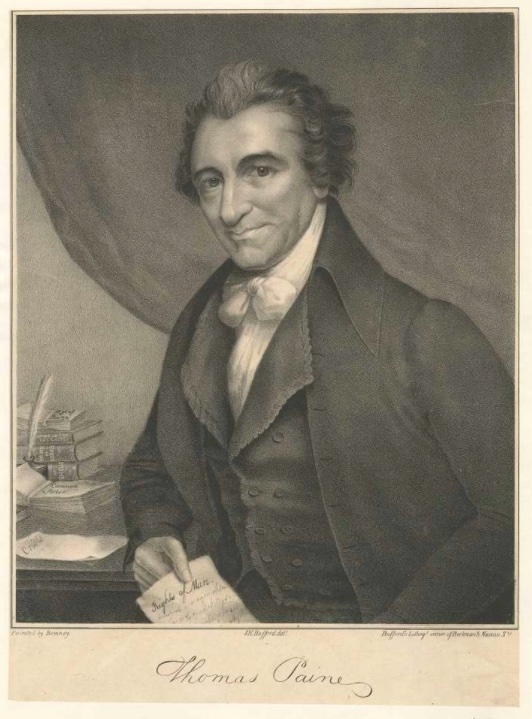 The Freedom From Religion Foundation is delighted to report that the House Committee on Natural Resources today unanimously passed House Bill 6720 to authorize the Thomas Paine Memorial Association to establish a commemorative work in the District of Columbia.

This development means the bipartisan bill to create a memorial to Thomas Paine, sponsored by Reps. Jamie Raskin, D-Md., and Victoria Sparks, R-Ind., is now heading to the House floor for consideration.

FFRF is optimistic about the bill’s chances on the House floor, given the unanimous committee vote.

“We would like to thank the bill’s sponsors, Reps. Raskin and Sparks, for their leadership in advancing the bill,” says Annie Laurie Gaylor, FFRF co-president. “We are so grateful to have leaders in Congress who share our respect for one of America’s greatest historical figures, Thomas Paine.”

Adds FFRF’s Director of Governmental Affairs Mark Dann, “We would also like to acknowledge and thank all of the members of the Natural Resources Committee. These include Committee Chair Raul M. Grijalva, Ranking Member Bruce Westerman, Joe Neguse, chair of the Subcommittee on National Parks, Forests and Public Lands, and Ranking Member Ross Fulcher.”

“Today, Congress has taken a giant step to give Paine the central place of respect and awe he deserves in our nation’s capital, acknowledging his critical role in founding America and our constitutional republic,” says Margaret Downey, president of the association, which is shepherding the bill through Congress.

Downey noted that the memorial to Paine is already prefunded with a flood of voluntary contributions and pledges from private citizens. “It will be a powerful, educational and dramatic addition to the symbolic life of Washington, D.C.,” she promises.

Paine was one the greatest political writers and philosophers of the Revolutionary era. He was a Founder, veteran and patriot far ahead of his time. He galvanized the American public to support the Revolution with his pamphlet Common Sense, which spelled out the case for independence from Great Britain. Paine then served in the Continental Army.

A friend to humanity and a foe to tyrants, Paine championed the rights of the “common” people, and believed emphatically in the dignity and rights of humans, which drove him to challenge the divine right of kings, forever changing the course of U.S. history.

The Freedom From Religion Foundation, a state/church watchdog, is the country’s largest freethought organization, with 38,000 nonreligious members and 23 chapters all across the country.