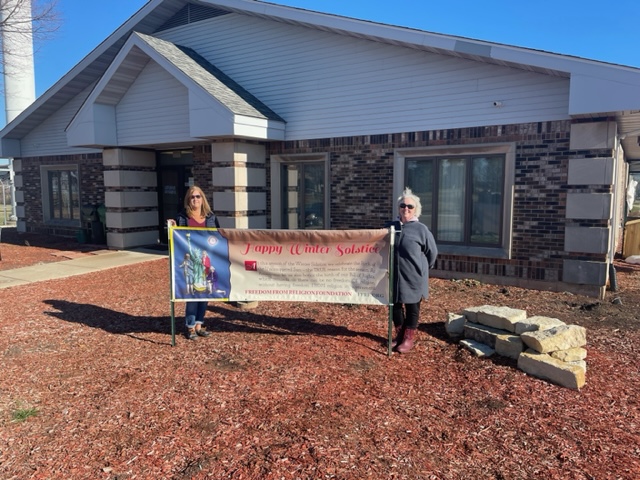 The Freedom From Religion Foundation proudly announces its first secular display in a quintessentially Illinois community not too far from Chicago.

FFRF has a “Happy Winter Solstice” banner at the Homer Township, Ill., Town Hall that features its Bill of Rights “nativity” scene. The tongue-in-cheek depiction features Founders George Washington, Thomas Jefferson and James Madison, plus the Statue of Liberty, gazing at a manger holding the Bill of Rights.

The banner, featuring wording by FFRF principal founder Anne Nicol Gaylor, reads: “At this season of the Winter Solstice, we celebrate the Birth of the Unconquered sun - the TRUE reason for the season. As Americans, let us also honor the birth of our Bill of Rights, which reminds us there can be no freedom OF religion without having freedom FROM religion in government.”

The work to get the display featured was not without pushback. Volunteers reported that the Holiday Display Program in Homer Township was initially resistant to the display, stating that the entity represented was not a religion. Furthermore, the proposed display time was initially more limited than for nonsecular displays. Township officials presented additional obstacles in asking for the banner to be displayed at the side of the building, in contrast to the prominence of the Christian nativity scene. After much back and forth, FFRF and its volunteers were able to give the freethought perspective a public display.

The negotiations required proves that there is still an uphill battle when it comes to secular representation during the holiday season. It remains important for nonreligious Americans to feel as though they also have a place in every community in December, as up to 30 percent of Americans now identify as religiously unaffiliated.

“A public forum in order to be truly public needs to be all-inclusive,” says FFRF Co-President Annie Laurie Gaylor. “People without religion, an ever-growing share of the population, deserve representation, too.”

The display will remain up until Jan. 8. FFRF thanks volunteers and members Nancy Hockenberry and Ellen Moriarty for making the display possible. The Bill of Rights graphic was designed by Jake Fortin.

The Freedom From Religion Foundation is a national nonprofit organization with more than 38,000 members and several chapters nationwide, including over 1,200 members in Illinois and a Chicago chapter. Its purposes are to protect the constitutional principle of separation between state and church, and to educate the public on matters relating to nontheism.