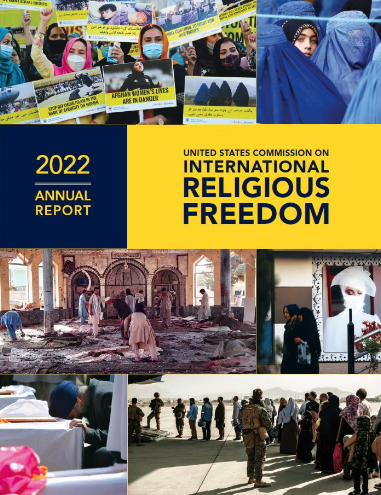 The Freedom From Religion Foundation would like to highlight the findings of a newly released report from the U.S. Commission on International Religious Freedom that shows how essential separating religion from government is for combating discrimination.

The report, titled “A Global Overview of Official and Favored Religions and Legal Implications for Religious Freedom,” examines countries that either have an official state religion or that explicitly or implicitly favor one religious group. It finds a strong correlation between this official religious sponsorship and discrimination. The report explains that “while there are some governments that identify closely with a religion and provide robust protections of [religious freedom] and other universal rights to their populations . . . they represent the exception rather than the norm.”

Most countries that officially support a religion — 57 out of 78 — have discriminatory laws or policies “on the basis of religion that lead to discrimination or repression, or that hold the potential to do so.” The targets of this discrimination are typically “religious minorities, dissenters within the majority faith, nonreligious persons, women, and members of the lesbian, gay, bisexual, transgender, queer, and intersex (LGBTQI+) community.” Islam and Christianity make up 86 percent of such countries, with Buddhism a distant third.

Curiously absent from the report is the United States itself, which of course has no official religion, but which has at times, at least in some states, clearly met the standard of officially supporting one religion, Christianity, over others. Some U.S. states still have blasphemy laws on the books, and American Christian nationalists have in recent years passed and used laws to favor Christians under the law. For example, the Religious Freedom Restoration Act has been used largely to allow Christian business owners to discriminate. Many state laws now encourage or mandate placement of “In God We Trust” in public schools, with pious politicians often citing the motto, adopted belatedly in the late 1950s, as “evidence” that the U.S. is a Christian nation. Taxpayer dollars are often diverted from public education to support private Christian schools, and more.

The report notes a strong correlation between religion-based discrimination and other types of human rights abuses. Countries “that fail to protect an individual’s right to freedom of religion or belief also generally fail to protect the individual’s right to espouse and express political views, sexual or gender identity, or to exercise the right to assembly and association, among others,” the report clarifies. This trend can be seen in the United States as well, where the same Christian nationalist lawmakers who seek to give Christians favored treatment under the law are also the most likely to trample on other civil liberties of their dissenters.

“This is the danger of government officials believing that they are carrying out the work of a deity, rather than serving We The People according to secular principles,” notes Dan Barker, FFRF co-president.

FFRF appreciates that the report specifically addresses anti-blasphemy laws and global discrimination against “nonbelievers, atheists, humanists and others” who often face “discrimination or worse, because of government laws on the basis of religion.” This, too, is still very much the case in the United States. Tennessee lawmakers recently showed their open anti-atheist bigotry, by removing an archaic ban on ministers serving in public office while deliberately leaving in place a similar (unenforceable) ban on atheists.

Finally, while the report underscores the importance of separating religion and government, it also reminds us that doing so is not enough, cautioning that the “absence of an official or favored religion is no guarantee of a country’s protection or promotion” of religious freedom. Obvious examples include China and North Korea, which serve as warnings that having an official separation between state and church — a notion that the United States can claim to be the first to adopt — could still fall victim to totalitarian regimes violating basic human rights. The lesson is clear: We must remain vigilant in protecting democracy (necessitating the upholding of the Bill of Rights) and stay engaged in the democratic process, to ensure that the United States does not backslide any further in maintaining the hard-fought progress toward equality that our Constitution aspires to.

This report reinforces what FFRF has been educating the public on for decades: Separating state and church is essential for true religious freedom. The Freedom From Religion Foundation hopes Americans will take this lesson to heart.