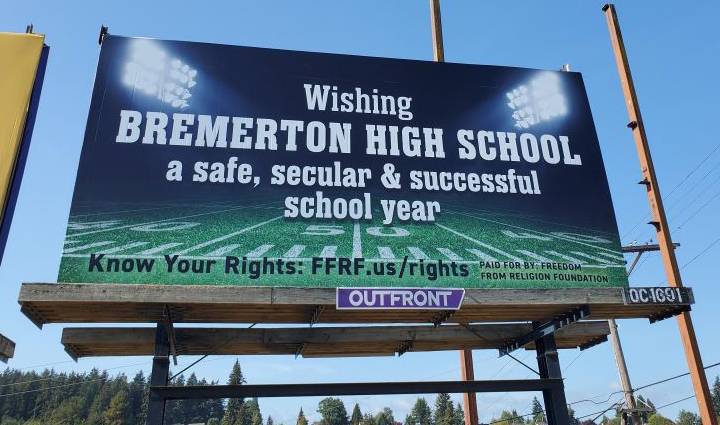 The Freedom From Religion Foundation is kicking off a national drive to make students aware of their continuing right to be free from religious coercion in public schools, with a billboard message in Bremerton, Wash., site of the notorious lawsuit by prayerful Coach Kennedy.

This is the first of a multipronged FFRF reaction to the U.S. Supreme Court’s Kennedy v. Bremerton decision in June, which ignored the rights of students by siding with a public school coach who insisted on abusing his position of authority to proselytize. The justices turned a blind eye to the serious harm caused to students when the boundaries between religion and public schools are blurred. Notably, the court ruled only that Coach Joseph Kennedy could pray privately at the 50-yard line following the conclusion of the game, not that he could lead students in prayer as part of school events.

Anticipating confusion over the ruling, however, FFRF has charted a course of action to ensure public school students know that they still have rights to a secular school and playing field. The campaign includes an online “Know Your Rights” resource webpage and brochure for students. (FFRF’s website also offers a handy wallet-size card for students to print out and carry with them.)

• Be free from coach or teacher prayer.

• To be free from bullying or harassment.

• To be free from religious coercion.

And, FFRF advises students, “You have the right to complain about violations.” The online resource encourages students to report Establishment Clause violations to FFRF here.

Teachers and coaches are given enormous influence over our children as authority figures in control of their academic and extracurricular success, the Know Your Rights guidelines advise. “No student should have to feel like an outsider on their school sports team or in their classroom because teachers and coaches insist on pushing religion and prayer at school,” says FFRF Legal Director Rebecca Markert. FFRF Counsel Liz Cavell adds, “FFRF hears from thousands of students and parents each year who are harmed by First Amendment violations in our public schools.”

Meanwhile, when FFRF becomes aware of coaches or teachers crossing the line since the Kennedy v. Bremerton ruling came down in June, the national state/church watchdog and its team of attorneys are informing public school administrators that they still have an obligation to respect the rights of students to a public school education free from school-sponsored religion, even in the aftermath of the Kennedy v. Bremerton judgment.

FFRF is making administrators in such instances aware that this decision does not give carte blanche to public school employees, including coaches, to engage in religious activity with their players or other subordinates, nor does it allow school districts to impose prayer on all students, parents, and community members gathered for school-sponsored events. Public schools have a constitutional obligation not to coerce students into participating in religious rituals like prayer.

“There’s never been a more urgent time for an educational campaign of this type than now,” says FFRF Co-President Annie Laurie Gaylor. “We need more than ever to make certain that students ‘Know Their Rights.’”

The Freedom From Religion Foundation is a national nonprofit organization with over 38,000 members and several chapters across the country. FFRF protects the constitutional separation between state and church and educates about nontheism.