A Georgia school district must take immediate action to stop a middle school teacher who has been boastfully proselytizing students, the Freedom From Religion Foundation is insisting. 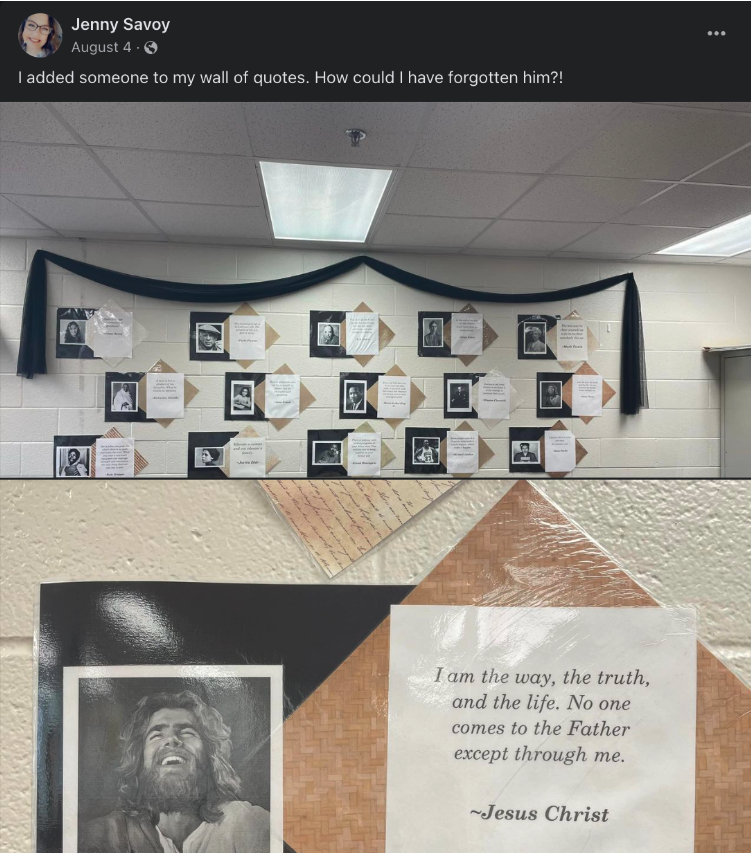 Jenny Savoy, a reading enrichment teacher at Richards Middle School in Gwinnett County, Ga., has been openly bragging on Facebook about using her position to convert students to Christianity. She runs a religious club at her middle school and regularly preaches to students. For instance, she posted a photo on Facebook on Aug. 4 displaying a New Testament quote that she’s added to her “wall of quotes”: “I am the way, the truth, and the life. No one comes to the Father except through me. – Jesus Christ.”

Savoy had a Facebook post on Sept. 11 explaining that the school’s principal allowed her to start a prayer group with students: “Thankful for an amazing principal who allowed me to start this. God is going to move in our school!” 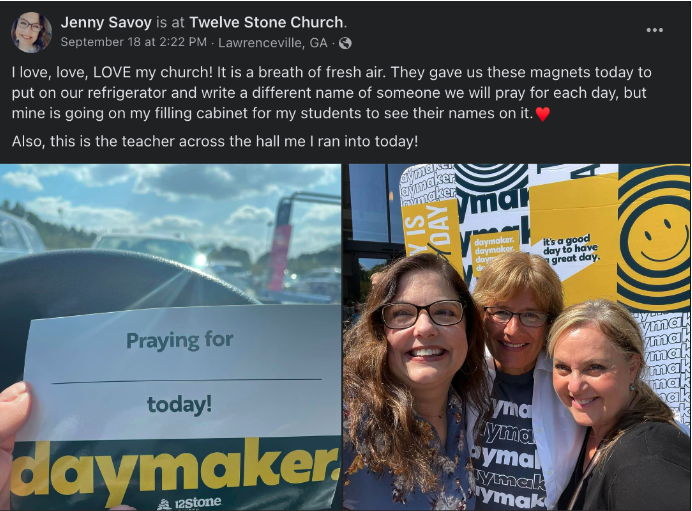 Savoy stated in a Facebook post on Sept. 18 that she would be posting a religious message on her filing cabinet so that students will see that she is praying for them. She gushed in the post:

I love, love, LOVE my church! It is a breath of fresh air. They gave us these magnets today to put on our refrigerator and write a different name of someone we will pray for each day, by mine is going on my filling cabinet for my students to see their names on it. 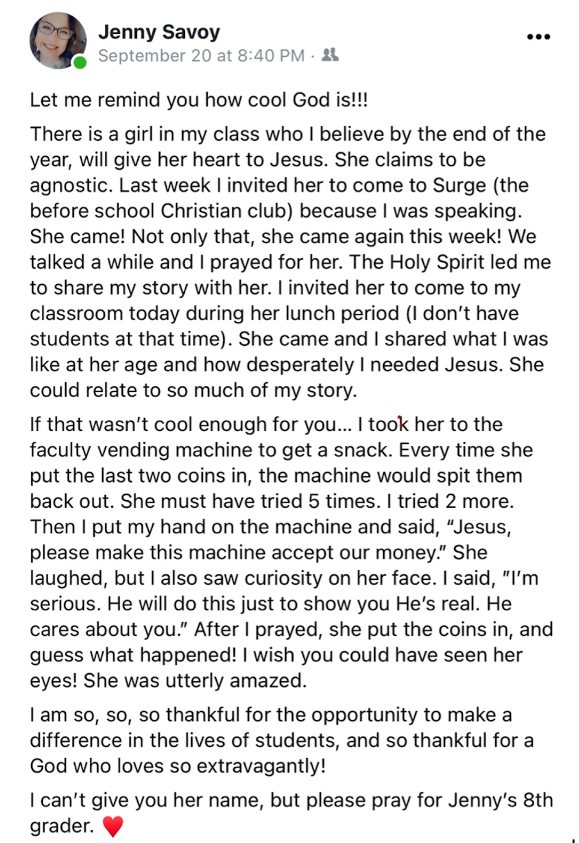 Disturbingly, Savoy described in detail in a Facebook post on Sept. 20 how she has been using the prayer club to lure students to her faith:

Let me remind you how cool God is!!!

There is a girl in my class who I believe by the end of the year, will give her heart to Jesus. She claims to be agnostic. Last week I invited her to come to Surge (the before school Christian club) because I was speaking. She came! Not only that, she came again this week! We talked a while and I prayed for her. The Holy Spirit led me to share my story with her. I invited her to come to my classroom today during her lunch period (I don’t have students at that time). She came and I shared what I was like at her age and how desperately I needed Jesus. She could relate to so much of my story.

If that wasn’t cool enough for you… I took her to the faculty vending machine to get a snack. Every time she put the last two coins in, the machine would spit them back out. She must have tried 5 times. I tried 2 more. Then I put my hand on the machine and said, “Jesus, please make this machine accept our money.” She laughed, but I also saw curiosity on her face. I said, “I’m serious. He will do this just to show you He’s real. He cares about you.” After I prayed, she put the coins in, and guess what happened! I wish you could have seen her eyes! She was utterly amazing.

I can’t give her name, but please pray for Jenny’s 8th grader. [Emphasis added.]

Savoy followed up about this student she is targeting for conversion with a post on Sept. 29: “I gave my ‘8th grader’ a Bible and journal today. I can’t wait to see what God does in her life. Keep praying for her please.”

Gwinnett County Public Schools must immediately investigate this disturbing behavior and terminate Savoy’s employment if her accounts are confirmed, FFRF is demanding.

“If Ms. Savoy is incapable of teaching without abusing her position to convert students to her personal religion, which appears to be the case, she must be terminated,” FFRF Staff Attorney Chris Line writes in a letter to Superintendent Calvin J. Watts. “Given her egregious behavior, Ms. Savoy should be terminated, and administrators at the school should be reprimanded and reminded of their duties under the law. Ms. Savoy has demonstrated that she is not willing to put her students and her secular position as a teacher ahead of her desire to proselytize and push her personal religious beliefs.”

It is well settled that public schools may not show favoritism toward or coerce belief or participation in religion, FFRF reminds the school district. Public schools have a constitutional obligation to remain neutral toward religion and to protect the rights of conscience of young and impressionable students.

And it isn’t a violation of the free speech rights of teachers when a school district regulates what they teach to students while acting in their official capacities, FFRF emphasizes. Teachers have access to a captive audience of students due to their position as public educators. Therefore, the district must regulate religious proselytizing during the school day. Courts have upheld the termination of teachers who violate the principle of separation between church and state.

“This sort of predatory conduct cannot be tolerated in our public schools,” says FFRF Co-President Annie Laurie Gaylor. “The freedom of conscience of students, especially those belonging to minority religions — and no religion at all — is in grave jeopardy under such teachers. The district must act to protect its students immediately.”

The Freedom From Religion Foundation is a national nonprofit organization with more than 38,000 members and several chapters across the country, including more than 600 members and a chapter in Georgia. Its purpose is to protect the constitutional principle of separation between state and church.