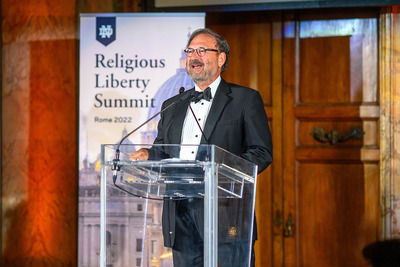 Patronizingly, he then offered, as though it were original, the obvious idea of finding “common ground” with nonreligious people on the topic of religious liberty, such as by pointing out that religious liberty promotes domestic tranquility.

“Contrary to Alito’s biased remarks, nonbelievers and heretics have always been the first and most ardent defenders of religious freedom,” notes Annie Laurie Gaylor, FFRF co-president. “We have the most to lose when religion is allied with the state.” She asks: “How can nonreligious appellants before Alito expect a fair hearing?”

If Alito’s definition of religious liberty actually means privileging religion and religionists, he’s right that nonbelievers will challenge such interpretations. If by religious liberty Alito means that believers can take away other peoples’ reproductive freedoms or be exempted from civil rights ordinances against discrimination, then that is a redefinition of “religious liberty” nontheists emphatically will take exception to.

Alito also repeats tropes crediting religious groups and people with leading the movement to abolish slavery in the United States. Yet the bible, in both the old and new testaments, explicitly sanctions slavery. That’s why it was repeatedly invoked to justify chattel slavery. The majority of church denominations, except Quakers and some Universalists, were johnny-come-latelies to the abolition movement. The Southern Baptist denomination was founded explicitly as a pro-slavery breakaway.

Gaylor points out that Alito ignores the fact that the earliest to call for abolition of slavery, for women’s rights to vote and full citizenship, for the right to contraception and abortion, for abolition of the death penalty and humane treatment of the mentally ill, in fact, have been freethinkers — precisely because the bible opposes such rights.

Alito also opined during his talk that you can “not extinguish the religious impulse.” He added: “Our hearts are restless until we rest in God. And, therefore, the champions of religious liberty who go out as wise as serpents and as harmless as doves can expect to find hearts that are open to their message.”

FFRF Co-President Dan Barker notes that the verse in Matthew 10:16 that Alito cites describes how Jesus sends out disciples as sheep in the midst of wolves. In other words, Alito is portraying non-Christians and nonbelievers as wolves and threats to “sheep.” The two verses preceding the cited passage say that if a city doesn’t welcome Christians, then the city’s punishment will be “worse than Sodom and Gomorrah on Judgment Day.” The verses following warn that the followers of Jesus will be dragged out and flogged in the synagogues and by councils, governors and kings.

“The whole context of this passage is that Christians are being persecuted by non-Christians,” comments Barker, a former evangelical minister and author of many books about religion, including Godless. “This is a highly disturbing message coming from a justice of the Supreme Court.”

FFRF is a national nonprofit organization with more than 37,000 members across the country. Our purposes are to protect the constitutional principle of separation between state and church, and to educate the public on matters relating to nontheism.