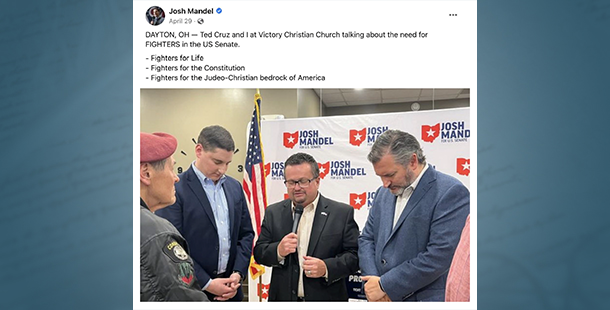 The IRS should investigate five Ohio churches that have been blatantly campaigning for an Ohio senatorial candidate, the Freedom From Religion Foundation is insisting.

Northwest Baptist Church in Toledo invited Josh Mandel, a Republican candidate for the Ohio Senate primary, and Sen. Ted Cruz to come speak to its members on April 30. Northwest Baptist Church advertised this event on its Facebook page as a gathering to join Mandel and Cruz “as they rally for the upcoming Ohio primary.” The church did not invite any of Mandel’s opposing candidates. Pastor Andrew Edwards III introduced Mandel to his congregation, touting his record when he was state treasurer:

Father, we thank you Lord for the opportunity we have today to fight for our faith and freedom. Lord, I thank you for these men that are with us today. As a result of his innovation in this area, Josh earned Ohio the number one ranking in America for government transparency. Let’s welcome the next senator of the state of Ohio, Josh Mandel.

Victory Christian Church in Kettering also recently engaged in unabashed campaigning for Mandel. The church reportedly hosted two political rallies in April, both of which had Mandel as a guest. On April 21, it invited Mandel to come speak at its “Faith and Freedom Rally.” The church advertised this event on its Facebook page, and according to its Facebook post, the church was “honored to host” the rally. Soon after this event, the church hosted another “Faith and Freedom Rally” on April 29 with guest speakers Mandel and Cruz. In a post depicting Pastor Steve McCuin praying over Mandel and Cruz, Victory Christian called this event a “success.” The church did not invite any of Mandel’s opposing candidates. Mandel also posted about this event on his official campaign Facebook.

Solid Rock Church, based in the town of Lebanon, Ohio, has recently politicked on Mandel’s behalf, too. In late October last year, Solid Rock hosted a political rally at its church. Mandel told attendees that he believed the “election was stolen from Donald J. Trump.” He claimed that if elected, he would vote with the Constitution in one hand and the bible in the other.

On Dec. 5, 2021, Pastor Lawrence Bishop publicly applauded Josh Mandel for his conservative beliefs in front of his congregation: “A man that is running for Senate like Josh Mandel who is nationally known and big-time in politics goes to Lakota school board meeting and gets booed for telling his conservative beliefs that he’s against mandatory mask mandates for children and for this transgender bathrooms and all this. He says all these things and has to be escorted out because people that are booing him because he’s pro-life, because he’s for the things of God.”

On April 30 of this year, Solid Rock Church hosted a “Faith and Freedom Rally.” The church advertised for the event through its Facebook page and also posted a video of the rally. In attendance at the rally were lieutenant governor candidate Candice Keller, Cruz and Mandel. During the event, Keller introduced Mandel: “I hope every single person here votes on Tuesday and I hope you vote rightly. He has repeatedly stood up for Judeo-Chrsitian values even when it could have hurt him politically. It is my absolute honor to introduce you to our conservative hero, please stand for Josh Mandel.”

And the primary pastors at Solid Rock, Pastor Lawrence Bishop and Pastor Darlene Bishop, were two of the 114 Ohio pastors to publicly endorse Josh Mandel for the Ohio Senate Primary Election.

Yet another church that has been shilling for Mandel is Calvary Baptist Church in Portsmouth. On Nov. 12, 2021, Calvary Baptist invited Mandel to come speak at its church. It advertised this event on its Facebook page as an opportunity to meet with “the leading candidate for Senate for the state of Ohio.” The church also noted in its promotion of this event that it believes that “elected officials should have to speak to and answer to bible-believing people.” The church did not invite any of Mandel’s opposing candidates. Mandel posted on his official Facebook page after this stop on his church-based campaign that he discussed how “Judeo-Christian values and American values are one in the same” with the Calvary Baptist Church members.

In another violation FFRF is asking the IRS to probe, Ascent Church in Westlake, Ohio, invited Mandel to come speak at its church on March 8. Ascent Church advertised this “Faith Family Freedom Rally” on its Facebook page as a gathering to “support biblical values.” Ascent Church also invited Pastor JC Church, one of the 114 Ohio pastors who officially endorsed Mandel, to speak at its rally. The church did not invite any of Mandel’s opposing candidates. Mandel posted on his official Facebook after this stop on his “church-based campaign” that he discussed with church members how “separation of church and state does not exist.”

IRS regulations specify that 501(c)(3) organizations, which include churches and other religious organizations, are prohibited from “[participating in or intervening in] . . . any political campaign on behalf of (or in opposition to) any candidate for public office,” Staff Attorney Madeline Ziegler underscores on behalf of FFRF in complaint letters to the IRS. Because these churches invited a political candidate to speak to its members and endorsed him shortly before the Ohio Senate primary election, they should no longer receive the benefits of 501(c)(3) recognition, including tax-exempt status.

“Groups that are tax-exempt are essentially subsidized by the public,” explains FFRF Co-President Annie Laurie Gaylor. “Political donations are not tax-exempt. Churches and other (c)(3) tax-exempt organizations therefore may not engage in partisan politicking for that reason, or they should lose their exemption.”

That’s why FFRF is urging that the IRS commence an immediate investigation into these five churches and take appropriate action to remedy any violations of 501(c)(3) regulations that have occurred or which continue to occur.

You can read one of FFRF’s letters to the IRS here.

The Freedom From Religion Foundation is a national nonprofit organization with over 37,000 members and several chapters across the country, including more than 1,000 members and two local chapters in Ohio. Our purposes are to protect the constitutional principle of separation between state and church, and to educate the public on matters relating to nontheism.