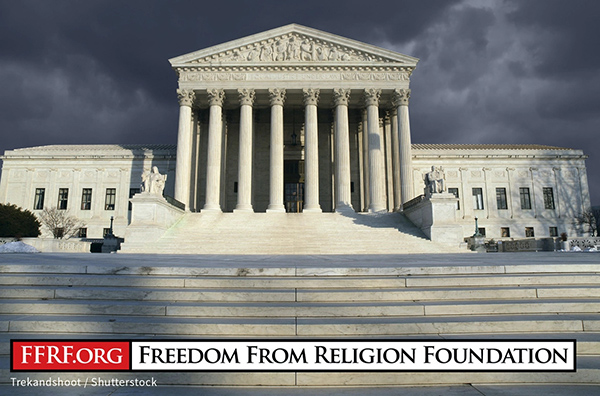 The Freedom From Religion Foundation and its allies are urging Chief Justice John Roberts to probe into a Religious Right outfit’s startling claims that it has prayed with Supreme Court justices inside the court itself.

Peggy Nienaber, vice president of Faith & Liberty, has insisted in a recent Rolling Stone story that she has prayed in the past with justices inside the Supreme Court building. The group’s founder, Rob Schenck, has likewise confirmed that while he was in charge of Faith & Liberty up until the mid-2010s (then called Faith and Action), he met with and prayed with Justices Samuel Alito and Clarence Thomas (as well as then-Justice Antonin Scalia), reportedly saying that “he would pray with them inside the high court.”

Nienaber and Schenck’s assertions are alarming because Faith & Liberty is a subsidiary of Liberty Counsel, a frequent litigant before the court, as FFRF, the Center For Inquiry and American Atheists point out in the joint letter. Liberty Counsel has represented parties in front of the court at least four times and has filed at least 17 amicus curiae briefs with the court, including in the just-decided Kennedy v. Bremerton and Dobbs cases. (Faith & Liberty is, interestingly, physically located directly next to the Supreme Court building.)

“We respectfully ask that you commence a formal investigation by the court into visits to the Supreme Court building and meetings with justices by advocates before the court,” the letter asks. “If confirmed, justices should be advised that such meetings are improper because they impart on the public a sense of impropriety and an appearance of bias. If Nienaber’s claims of praying with justices are false, the court should reassure the public that justices have not improperly met with advocates before the court in the manner alleged.”

The letter asks Chief Justice John Roberts to note the extraordinary nature of these allegations. None of the organizations signing on to the letter has ever before requested a formal investigation into the conduct of those appearing before the court and toward the justices. If confirmed, the allegations cast serious doubt on the impartiality of multiple justices — and the court itself. That’s why an investigation is absolutely necessary, the three secular groups assert.

“These outrageous allegations make clear why it’s imperative for Congress to pass Rep. Hank Johnson’s bill, the Supreme Court Ethics, Recusal and Transparency Act (SCERT),” says Annie Laurie Gaylor, FFRF co-president. It was approved by the House Judiciary Committee in May and would require justices of the Supreme Court to adopt and follow a code of ethics, place transparency standards on gifts and travel, codify recusal standards and require the court to disclose lobbying and dark money interests before it. Johnson is a member of the Congressional Freethought Caucus.

You can read the entire letter here.

The Freedom From Religion Foundation is a national nonprofit organization with more than 38,000 members across the country, including members in all 50 states and in the District of Columbia. FFRF protects the constitutional separation between state and church and educates about nontheism.